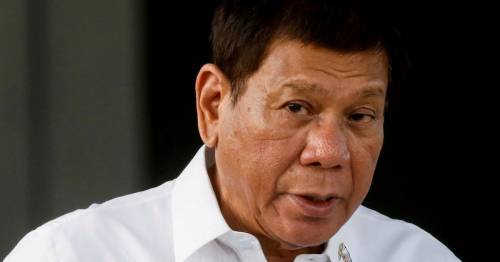 The outgoing populist president of the Philippines said that he plans to kill between three and five more drugs lords before stepping down from office next month.

Rodrigo Duterte has led a bloody campaign against the drugs trade during his six years in power and vowed to "finish" a few more drugs criminals in the coming weeks, Newsweek reported.

In a taped address to the nation, he said: "Before I leave, let's finish three or five drug lords. I want to kill them. I do not want them alive.

"I would tell my co-workers in government, we have to gamble. We have to fight them, and when we fight, just kill them."

Duterte, who was mayor of the city of Davao for 22 years before becoming president in 2016, has a reputation as a 'strongman' politician and as an anti-drugs crusader.

Philippine Drug Enforcement Agency data showed that as of February 28 this year, over 6,000 suspects have been killed as part of the president's campaign against drugs, which counted 229,868 police operations and 331,694 arrests.

However, it is expected that the true number of people killed in the street by police and vigilante groups is significantly higher.

The despot leader attracted global condemnation last year when he said people who refuse to be vaccinated against Covid could be thrown in jail or have medication meant for pigs injected into them.

In a chilling rant, Philippines President Rodrigo Duterte threatened that those who do not have the jab could be injected with Ivermectin – an anti-parasite drug widely used to treat animals.

The strongman, who last year warned those who break quarantine rules would be "shot", said local leaders may be instructed to draw up a "tally" of those who refuse to be inoculated.

In a televised address, Duterte said: "You choose, vaccine or I will have you jailed."

He continued: "But for as long as you are here and you are a human being, and can carry the virus, get vaccinated.

"Otherwise, I will order all the village captains to have a tally of the people who refuse to be vaccinated.

"Because if not, I will have Ivermectin meant for pigs injected into you."

In 2020, in a televised speech Duterte also urged the military to open fire on anyone who "causes trouble" during the country's lockdown.

He said: "My orders to the police and military … if there is trouble and there's an occasion that they fight back and your lives are in danger, shoot them dead.

"Is that understood? Dead. Instead of causing trouble, I will bury you."

He will leave office in June.