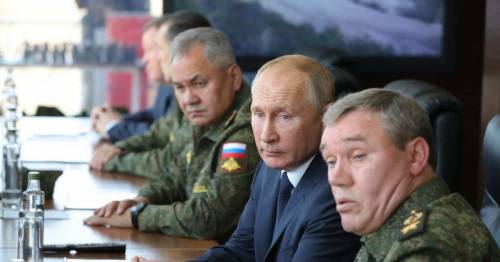 It is better Vladimir Putin dies from his supposed serious illness than carries on “destroying” Ukraine, Russia, and Moscow’s super-rich business elite, an oligarch has claimed.

The Russian President is alleged to be due to undergo surgery, possibly for cancer, according to supposed leaks from within the Kremlin.

Now a senior investigative journalist on Russian affairs says the army will disobey any nuclear bomb order as he is so unwell.

Christo Grozev also claims an oligarch close to the dictator says it is better for the world if he dies in the next few months rather than continue his illegal war.

“Recently with colleagues we listened to a recording of an oligarch, extremely close to Putin,” he said.

"This billionaire was telling another oligarch 'It’s better he dies from this'.

"It was better that he was dead 'because he has destroyed us, is destroying Ukraine…and Russia'."

Grozev said of the mega rich tycoon set around Putin: “This is how they think. This is how it is.

“In other words they are actively and passively thinking, how to end this?"

He says his officers are not willing to risk being hauled before a modern equivalent of the Nuremberg trials for unleashing nuclear Armageddon.

Nor would they obey a Putin order to kill opposition forces, claimed Mr Grozev, who is associated with the Bellingcat open source research group.

He said: “I can’t speak without information, but we know that oligarchs from his closest circle claim it.

“We also know that the Lubyanka [FSB secret service] sent a letter about a month ago to all regional FSB chiefs.

“It said: ‘If you hear about him having a very serious illness, we insist you do not pay attention’.

“So they all thought this means the exact opposite.”

He went on: “So I think it doesn’t matter that much if he is dying or gravely ill, what matters is people around him think so.

“This changes the formula, this is a factor in deciding just how loyal people feel they should be to him."