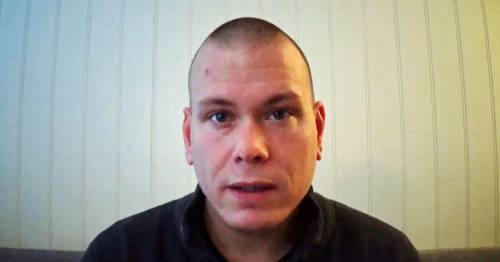 Espen Andersen Braathen is charged with the murders and will be assessed by forensic psychiatric experts, according to the PST security service.

The 37-year-old Danish suspect converted to Islam and was of concern to police about signs of radicalisation.

Flags flew at half mast across Kongsberg where the victims, four women and one man aged between 50 and 70, were killed. Two people, including an off-duty police officer, were wounded in the attack.

Espen Andersen Braathen, 37, has been charged with killing five people

Norwegian police said the attacker broke into homes at random and murdered the strangers he encountered there.

Police lawyer Ann Iren Svane Mathiassen told state broadcaster NRK: "The dead were found outside and were found inside the residential house,"

"We have information that the perpetrator entered homes where he committed murder."

She added: "According to the information we have, and the way we perceive the case, these are completely random victims."

Police are treating the rampage as a terrorist attack
(

A statement issued by PST, Norway's security service, said: "The incidents in Kongsberg appear at the moment to be an act of terrorism, but the investigation, which is led by the South-East police district, will clarify in more detail what the incidents were motivated by."

A police attorney told Reuters that Braathen had acknowledged killing the victims. His lawyer confirmed only that Braathen was cooperating with police and giving a detailed statement.

Police had been concerned about signs of radicalisation in the suspect before the attacks, carried out with a bow and arrow and other weapons, a senior officer said.

The head of Norway's PST security police, Hans Sverre Sjoevold, said Braathen had a history of being "in and out" of health institutions.

Kongsberg resident Markus Kultima, 23, who works in a beer shop and lives above the store, witnessed parts of the attack.

"I saw a man come walking with an arrow in his back," Kultima told Reuters. He said it was the off-duty officer who told him to head home.

"I had to walk in the direction where that guy came from.

That was very heavy," Kultima said.

A relative of the suspect, speaking on condition of anonymity to Danish newspaper Ekstra Bladet, described the man as mentally ill and said the family had suffered threats for several years.

Heavily-armed police stand at the scene of Wednesday night's attack
(

The death toll was the worst of any attack in Norway since 2011, when far-right extremist Anders Behring Breivik killed 77 people, most of them teenagers at a youth camp.

Prime Minister Jonas Gahr Stoere, on his first day in office after winning an election last month, said: "My first thoughts go to Kongsberg, those who a lost their lives, those who were injured and those who live with the shock."

"The last 24 hours have shown that we have significant challenges," he said. "One in four or one in five who are referred to (treatment) are being turned down."

Previous : LiAngelo Ball set to play for Charlotte Hornets’ G League team, source says
Next : The Teacher Who Changed How We Teach Writing