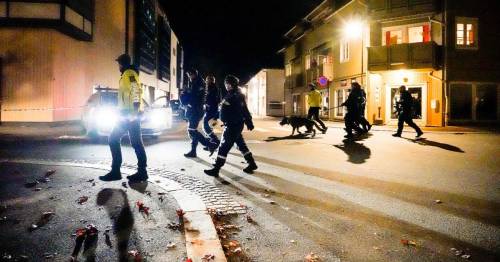 A witness to the bow and arrow rampage in Norway was watching Squid Game at the time and thought the distressing sounds from the unfolding scene were on the TV.

Witnesses described how he open fired inside a Coop Extra store, with initial emergency calls made at just before 6.15pm local time.

Sarkis Younan, who lives next to the supermarket, told local media: "I was sitting and watching Squid Game when I suddenly saw and heard sirens.

"I thought it was in the TV series. Suddenly I heard the police screaming like hell: 'Put down your weapon!'"

Police confirmed a suspect has been arrested following the incident and is believed to have acted alone.

A terror probe has been launched.

The man is said to have been involved in a confrontation with police at the scene and attempted to run away before being apprehended – just over 30 minutes after officers were first alerted at 6.13pm.

Discarded arrows on the street following the Kongsberg attack
(

Reports claim a responding officer was shot in the back with an arrow.

At least eight ambulances and three air ambulances were seen at the scene.

Oslo University Hospital was put on standby to receive victims.

She added the area of the attack is Vestiden and has housing, shops and a university campus.

In an interview with VG newspaper she said: "It is a tragedy for all those affected. I have no words.

"This is a shocking event that we did not think could happen in Norway.'"

Written and directed by Hwang Dong-hyuk, it centres around characters fighting to the death to win a massive cash prize.