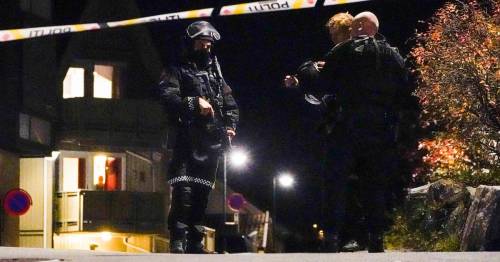 Norway attack: Hero police officer helped save lives despite arrow being lodged in back – World News

An off-duty police officer who was shot in the back with an arrow during the Norway rampage has been hailed a "hero" by a witness to the attack.

Espen Andersen Brathen has been charged with the murders of five people after a suspect began firing at people in a supermarket and surrounding streets in Kongsberg.

The 37-year-old Dane is an Islam convert and was of concern to police in relation to radicalisation prior to the incident on Wednesday evening.

Markus Kultima believes he could have been another victim if a currently unidentified wounded officer hadn't told him to get inside his home.

Do you know the heroic police officer? Let us know at webnews@mirror.co.uk

The 23-year-old, who lives just down the street from the Coop Extra where the incident started, was walking past the scene around 6.35pm, prior to the armed suspect being arrested.

He was then confronted by the officer who was in plain clothes and ushering people away.

Suddenly, Markus saw he had an arrow sticking out of his shoulder.

"He wasn't bleeding and didn't appear to be in much pain," Markus told the Mirror.

Markus was told to get inside with the shooter still active
(

"He looked determined and he said 'there is a guy who is shooting everybody.'

"I just said that 'I live just there' and pointed to the house."

Asked if he tried to help the officer, he said he seemed to be walking with such "purpose" he simply did as he was told.

"Everything was happening so fast. I didn't even react until I saw the arrow sticking out of him.

Espen Andersen Bråthen has been charged with killing five people in Kongsberg, Norway

"I know I should [have asked if he was alright] but he was walking with purpose so I didn't think of it."

Markus said he then went back to his flat and stayed inside for the rest of the night, receiving dozens of messages and calls from family and friends checking he was safe.

Referring to the officer, he said: "I know he saved lives…so he is a hero."

Markus said the town was still in shock today and he had tried to remain indoors as much as he could.

Earlier he drove past the town centre where people had gathered and were adding to the tributes already laid.

The off-duty policeman is understood to have been shopping when the suspect began firing at people in the supermarket and was later taken to hospital.