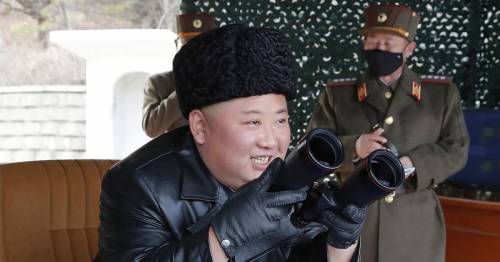 North Korea has launched a crackdown on people wearing leather trench coats, it is claimed – with authorities claiming it is disrespectful to leader Kim Jong-un.

Since the despot appeared on TV wearing a long leather coat two years ago, the look has become popular, insiders say.

In recent months Kim's sister Kim Yo-jong has also been pictured wearing one.

A resident of Pyongsong, a city north of the capital Pyongyang, told Radio Free Asia that the coats have grown in appeal this year after leading women, including Kim Jong-un's sister and likely successor Kim Yo-jong, were spotted in them.

The look has reportedly become popular in North Korea
(

The source said: "Now the leather coat has become a symbol for powerful women too.

"As leather coats began to be recognised as a symbol of power, private clothing merchants asked trading company officials to import synthetic leather since September of this year.

"They copied the design of the leather coats worn by the Highest Dignity and the officials and now they are being sold in the marketplace."

The resident added that police in Pyongsong recently started cracking down on both vendors and wearers, even though young men have been protesting against the new measures.

Authorities have described the fashion fad as an "impure trend to challenge the authority of the Highest Dignity", according to the resident.

Leather coats have become a symbol of power, it is claimed
(

Leather jackets, as opposed to full-length trench coats, have actually been worn in North Korea since the early 2000s, popularised by illegally smuggled South Korean films which circulate in provincial cities.

Another resident, from the North Pyongan province, explained that coats are both "imported from China" and "made domestically" with imported materials.

"Rich entrepreneurs are able to import the fabric for the coats by placing an order with state-run trading companies who have partially resumed maritime smuggling," they explained.

Although North Korea stopped trading with China in January 2020 due to Covid, "official smuggling" by state-run firms resumed in part in April this year.

A Chinese customs document seen by Free Asia Radio supposedly confirmed that dozens of metres of leather were imported into North Korea this month.

Previous : ‘We’ve been left to die’ says British dad hiding in Afghanistan with young children – World News
Next : “I kicked a player out of our Dungeons and Dragons group because she couldn’t do maths”