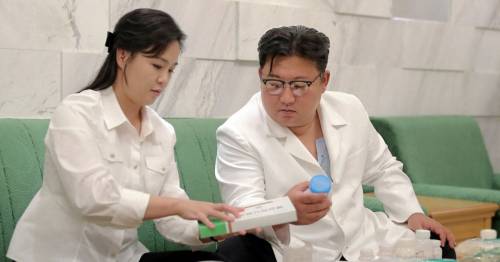 North Korea has said it is dealing with an outbreak of an unidentified stomach illness, shortly after Pyongyang admitted that it is battling rising Covid infections.

Leader Kim Jong-un has reportedly ordered quarantines be imposed to try and contain the new illness, which some health experts think could be cholera or typhoid.

The dictator said on Wednesday (June 15) that he had sent medicine to the affected areas to help those struggling with this "acute enteric epidemic".

"[Kim] stressed the need to contain the epidemic at the earliest date possible by taking a well-knit measure to quarantine the suspected cases to thoroughly curb its spread."

The propagandist state media reported that people started crying and shouting "Long life comrade Kim Jong-un!" after receiving the medicine from their leader.

Enteric diseases infect the gastrointestinal tract and are usually contracted from contaminated food or water – they can also spread from person to person.

North Korean officials have started disinfecting sewage and other waste material, reports say. KCNA added that quarantines have been implemented, alongside "intensive screening for all residents", reports the Sun.

Last month, North Korea declared a state of emergency after revealing that millions of its citizens were experiencing "fever", which global health experts believe to be untested Covid-19 infections.

The government referred to the fever outbreak as the "gravest national emergency" and imposed a nationwide lockdown to try and contain infections.

More than 26,000 cases of fever were reported on Thursday (June 16), with the total number of patients recorded across the country since late April approaching 4.56 million.

The isolated communist nation is also dealing with a long-term food shortage crisis which has likely being made worse by the Covid-19 pandemic.

Prior to the pandemic, The World Food Program estimated that approximately 11 million people – or more than 40% of the country's population – were undernourished and required immediate help.

North Korea has rejected the assistance of global aid agencies to alleviate its food crisis and has declined offers from foreign governments' to receive doses of the Covid-19 vaccine.