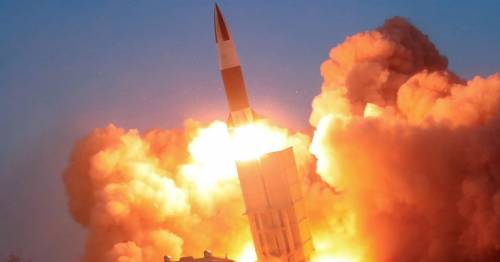 North Korea has fired an "unidentified projectile" believed to be a missile, South Korea's Joint Chiefs of Staff said on Wednesday.

Japan's Coast Guard also said an object that could be a ballistic missile had been fired from the secretive state.

Both the South Korean military and Japanese Coast Guard gave no details.

The coast guard in Japan later said the projectile appeared to have landed outside the country's 'exclusive economic zone.'

Analysts say the missile could be the country's first such weapon with a nuclear capability.

The country has been steadily developing its weapons programme
(

Pyongyang has been steadily developing its weapons programme amid a standoff over talks aimed at dismantling its nuclear and ballistic missile programmes in return for US sanctions relief.

The negotiations have stalled since 2019.

Earlier this week North Korea said it had successfully completed a test-fire for a new type of long-range cruise missile.

According to state media on Monday the missile flew 930 miles before hitting its target.

The weapons landed into the country's own territorial waters with tests carried out on Saturday and Sunday, according to KCNA.

It was seen as the North's first missile launch after it tested a new tactical short-range ballistic missile in March.

The secretive state celebrated its 73rd year since since its foundation last week, with a newly-slim Kim Jong-un making a rare public appearance watching thousands of his troops march in Pyongyang.