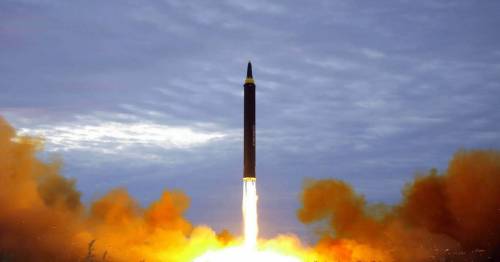 North Korea appears to have fired a ballistic missile into the sea that comes just just days after the last test, said the Japanese Ministry of Defence and South Korean media.

South Korea's military said North Korea fired a projectile off its east coast, and Yonhap news agency said the military believed it was a ballistic missile.

Japan's defence ministry also tweeted that the projectile could be a ballistic missile.

There has been a significant increase in ballistic missile testing by North Korea so far this year with leader Kim Jung-un having said it is being carried out to protect the country from foreign threats.

In a speech at a military parade last week, he also claimed his nuclear force was not only tasked with preventing war through deterrence, but potentially carrying out strikes against anyone who violates the North's "fundamental interests.''

On Wednesday, North Korea fired a ballistic missile towards the sea off its east coast, South Korea and Japan said, after Pyongyang vowed to develop its nuclear forces "at the fastest possible speed".

The United States assessed that North Korea was preparing its Punggye-ri nuclear test site and could be ready to conduct a test there as early as this month, State Department deputy spokesperson Jalina Porter said.

North Korea latest launch comes only days after its last
(

North Korea has said that it opposes war, that its nuclear weapons are for self-defence, and that they are necessary to protect itself in the face of "hostile" policies from Washington, South Korea, and Japan.

On his comments about using the nuclear weapons to strike any country that violates North Korea's "fundamental" interests, analysts say he is outlining an ambiguous, and potentially destabilising doctrine.

"His speech sent a message that North Korea might possibly use nukes pre-emptively depending on the situation, and more freely pose nuclear threats if necessary going forward,'' said Cha Du-hyeogn, a senior fellow at the Asan Institute for Policy Studies in Seoul.

Previous : Putin has not ‘destroyed’ bridges between Ukraine and Russia, Volodymyr Zelensky says
Next : Joel Embiid shows immediate impact in Game 3, but Philadelphia 76ers still have ‘a long way to go’