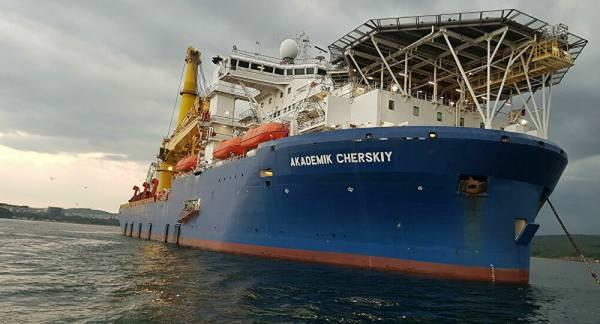 The pipe-laying vessel, which recently changed course several times, has been operated by “Gazprom Fleet” since 2016. It was earlier touted by Russian Energy Minister Alexander Novak as the ship capable of helping wrap up the Nord Stream 2 project.

The Russian pipe-laying vessel Akademik Cherskiy is now on her way to the country’s Kaliningrad Region, according to the ship-tracking website Marine Traffic.

The Akademik Cherskiy, which has been operated by “Gazprom Fleet” since 2016, changed her course a few times recently, with Marine Traffic reporting last month that the vessel was on its way to the Spanish port of Las Palmas.

Russian Energy Minister Alexander Novak earlier said that the use of Akademik Cherskiy remains one of several options to wrap up the Nord Stream 2 project, but that preparing the vessel for the mission will take some time.

He spoke after the Swiss-based offshore contractor Allseas Group S.A. in December suspended work on Nord Stream 2 amid the threat of US sanctions against the pipeline firm as part of the US National Defenсe Authorisation Act for the 2020 fiscal year.

According to the Russian president, the gas pipeline will be operational by the end of the first quarter of 2021 at the latest.

The 1,198-km (745-mile) twin gas pipeline will carry up to 55 billion cubic metres (1.942 trillion cubic feet) of natural gas per year from Russia to Germany, bypassing the existing route through Ukraine and Poland.

While Moscow describes Nord Stream 2 as a purely economic project, Washington continues efforts to undermine the venture, threatening everyone involved with sanctions and promoting its liquefied natural gas on the European market.