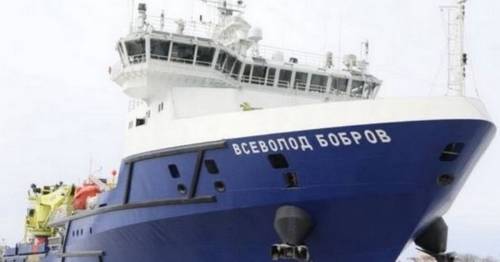 A Russian Navy ship is 'limping back to port' after catching fire following a strike by Ukraine, according to reports.

Ukrainian forces have damaged a modern Russian navy logistics ship in the Black Sea, setting it on fire, a spokesman for the Odesa regional military administration in southern Ukraine said on Thursday.

Spokesman Serhiy Bratchuk said in an online post that the Vsevolod Bobrov had been struck near Snake Island, the scene of renewed fighting in recent days.

"Thanks to the actions of our sailors, the Vsevolod Bobrov logistics vessel, one of the latest in the Russian fleet, caught fire.

"They say that it is going to Sevastopol. The information needs to be clarified," Bratchuk said, according to Ukra News.

10ztalk have quoted Bratchuk as saying: "As a result of the actions of our Navy, the Vsevolod Bobrov logistics ship, one of the newest in the Russian fleet, set on fire.

"They say she is limping toward Sevastopol."

The tiny Snake island is near Ukraine's sea border with Romania.

These reports come after shocking footage taken by a drone showed the moment a Russian helicopter was blown out of the sky by a Ukrainian missile.

The black and white footage, shared on social media, showed the Mi-8 helicopter unloading troops on Snake Island before an explosion rocks the camera.

Smoke is then seen billowing from the scene of the blast.

The short video is undated and it is unclear how many casualties were caused by the devastating attack.