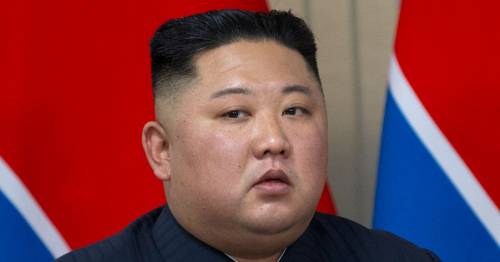 Recent photos of North Korea leader Kim Jong-un suggest he has lost a great deal of weight, sparking speculation about the state of his health.

South Korea's Yonhap news agency said Kim, who is thought to be 37, looked a lot slimmer than usual in photos that the state media released last Saturday, June 6.

The leader appeared in public for the first time in a month at the weekend to address a ruling party politburo meeting.

Analysis of these photos from NK News said Kim seems to have lost "a significant amount of weight".

The website shared how it looks as if Kim has tightened the strap on his very expensive watch, which is reportedly worth $12,000.

Photos seem to show that his left wrist where he wears the watch is thinner that it was in November last year and even March this year.

Kim is a heavy smoker and has reportedly struggled a lot with his health. Problems have been linked to his weight and also the lifestyle he leads.

Last year, the South Korea national intelligence service told MPs it thinks Kim weighed 22 stone and had gained approximately 6-7kg each year since he took over from his father in 2011, as NK News reports.

The leader's weight is often a point of discussion
(

The late Kim Jong-il died of a heart attack in 2011, leaving Kim Jong-un as his son to take over.

It is uncertain whether the leader's weight loss is a conscious decision from him or because of an illness.

There is a chance Kim has actively decided to lose weight to help his standing at home while the country is in the middle of an economic crisis causing food shortages because of a massive fall in trade with China in the pandemic.

He added: “If [the sudden weight loss] is due to a health condition though, the jockeying for his succession may already be happening behind the scenes, and that volatility could be trouble for the outside world."

The leader's health has often been a point of discussion.

Back in 2014 he was out of the public eye for around six weeks and when he returned he had a walking stick. Rumours from South Korea's spy agency suggested he had had surgery to remove a cyst on his ankle.

Then back in spring last year he was absent from public for around three weeks, with fears he was very ill or had maybe even died.

But when he reappeared he was in good health so the more likely reason was that he had been isolating due to the Covid pandemic.

Previous : Malaysia king meets politicians as discontent rumbles over virus crisis
Next : G7 Summit ring of steel in Cornwall with Navy warships, commandos and The Beast