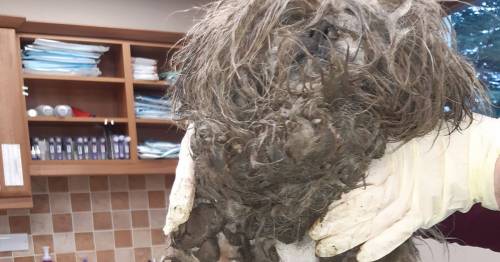 A dog that was found with "faeces-matted fur" is now unrecognisable after finding his forever home.

Little Milo, a Shih Tzu, was so poorly that rescue workers struggled to distinguish between his head and rear because of the state of his fur.

He was found in January last year in a small pen in Ireland.

His cage was so small he had no choice but to live among his mess which caused his poo to get clumped into his fur.

Milo was found in the filthy pen with Springer Spaniel named Gizmo.

Both pooches were found shivering and limping from the neglectful conditions.

They were both surrendered to the ISPCA following an unrelated complaint.

Gizmo unfortunately had to be put down to prevent further suffering after he was found with a series of health issues.

Both dogs were surrendered to the ISPCA in January 2021 after an unrelated complaint, but when taken into care Gizmo was found to have a range of health issues and was euthanised to prevent further suffering.

Milo has been rehomed after months of being in care
(

After months of care from charity workers, MIlo has made a full recovery and be rehomed with a loving family.

Norman Valentine pleaded guilty to offences under the Animal Health and Welfare Act (AHWA) 2013 in relation to the care of the dogs On May 5.

Looking at the ISPCA photographs submitted Judge Geraldine Carthy commented that they “speak a thousand words” and also said that the veterinary report did “not make pretty reading at all”.

Inspector Fiona Conlon of the ISPCA commented: “The conditions in which these poor dogs were forced to live and the condition of the dogs themselves were absolutely dreadful.

"The Springer, Gizmo, was in a terrible state and we can only take comfort in the fact that we were able to end his suffering.

"Milo’s coat was so matted it was hard to distinguish the head from the rear.

"His underside was covered with large balls of muck and faeces and his entire body was encased in what looked and felt like dreadlocks.

"Thankfully Milo made a full recovery and has since been successfully re-homed to a wonderful loving family, which he so deserved”.