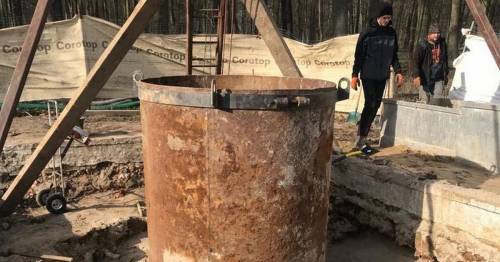 Treasure hunters believe they may have struck gold after searching an abandoned palace.

The potential horde is hoped to include the missing 'Gold of Breslau' and priceless artworks from masters such as Botticelli, Rubens and Monet.

It was hidden by Hitler's henchmen in WWII as the Red Army advanced on the German city of Breslau – which has since become the Polish city of Wroclaw.

But now history sleuths believe they have discovered a metal canister which could contain a whopping four tons of loot.

The mysterious canister has been found 10ft below the surface in an 18th century palace in the village of Minkowskie in southern Poland.

Lying around 10ft below the surface, the canister is thought to be between 4 and 5ft in length and 50cm in diameter.
(

The palace was used as a brothel by Hitler's evil SS guard during the war but has been left to rot ever since.

The find was made by investigator Roman Furmaniak and his team, from the Silesian Bridge Foundation, who have been searching the site for a year.

Like something from an Indiana Jones film Roman and his researchers discovered the location after uncovering secret documents, an SS officer's diary and a map.

They got the cache of info from the descendants of officers belonging to an ancient Christian society known as the Quedlinburg Lodge which dates back over 1,000 years.

Among the bundle of documents is a letter from a senior SS officer to one of the girls who worked at the palace and who later became his lover.

The officer wrote: “My dear Inge, I will fulfil my assignment, with God's will. Some transports were successful.

The metal canister could contain £200million of gold
(

“The remaining 48 heavy Reichsbank's chests and all the family chests I hereby entrust to you.

“Only you know where they are located. May God help you and help me, fulfil my assignment."

The diary describes one cache as containing 47 works of art of international importance, believed to be stolen from collections in France.

Roman said: “Several people took part in hiding the deposits in Minkowskie. One of them was an officer called von Stein.

The find was made by investigator Roman Furmaniak and his team, from the Silesian Bridge Foundation

“He used to stay in the palace because he had a lover there. Due to its location it was often visited by high-ranking SS officers who treated it like a brothel.”

Inge was the guardian appointed by von Stein to keep an eye on the hiding place.

Roman explained: “She was in love with the handsome officer in a black SS uniform. They were like gods.

“She believed that she would have to stay there for a year, maybe two, then it would all be over.

“Nobody believed then that the region would come under the control of the Soviet Union.

“There was a two-month period in 1945 when she had to hide in the forest from the Russians. But when she got back, the area had not been disturbed.

“If they had dug a hole, they would have taken what they wanted and then left the hole. We have seen this in history many times in Poland.”

Researchers discovered the location after uncovering secret documents, an SS officer's diary and a map
(

The Silesian Bridge Foundation is now waiting for permission to raise the canister to the surface although it is feared the site could have been boobytrapped so they also have to wait for the Polish army to make sure it is safe.

But they are also searching other areas of the site for a further six tons of treasure including old coins, medals, jewellery and valuables deposited by wealthy people in the city to the local Nazi police for safekeeping.

It is also suspected the former palace could contain religious objects gathered by Hitler's sinister lieutenant Heinrich Himmler, the head of the feared SS.

His secretive organisation was known to have scoured the globe for sacred items in an attempt to find evidence for Hitler's bizarre racial theories.

Other valuables are far more mundane and could include bank deposits from the Reichsbank as well as private German banks and civilian deposits.

The Germans were encouraged to deposit as much gold money and jewellery as they could before the country fell to the rampaging Red Army.

According to local legend, the treasure was collected in the building of the police headquarters in Breslau and packed into crates as the nation braced for the looting Soviet hordes to descend in the final days of WWII.

It is believed the treasure was supposed to have been transported from Breslau towards the Sudeten mountains but it vanished soon after departing and the trail went dead.

One theory is that Himmler himself may have ordered it hidden in case he survived the war and could try and create a Fourth Reich after Hitler fell.

But Roman insists his team are not in for themselves and merely want to return the treasures to their rightful owners.

He said: “We are making preparations as we speak to start digging at the other ten sites, where we expect to find much more.

“We are described everywhere as treasure hunters. In fact we want nothing for ourselves.

“The goal of the Quedlinburg Lodge and therefore the foundation is to hand these deposits over to their rightful owners in the interests of world heritage and as an act of atonement for the Second World War.”

Previous : Britain’s largest snake which can grow up to 6ft is back breeding in the wild
Next : Vladimir Putin appears with mysterious marks on cheeks after missing annual hockey match – World News