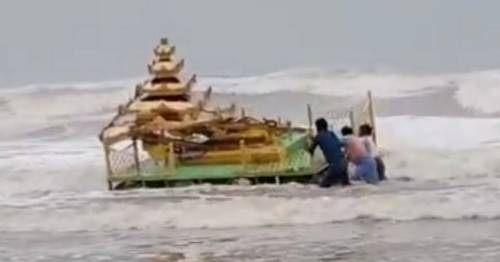 A golden-coloured chariot has washed up on the shores of an Indian state after cyclone Asani hit the Bay of Bengal.

The chariot, thought to be from one of the southeast Asian countries of Indonesia, Myanmar or Thailand, washed up on the shore of Sunnapalli Sea Harbour in Srikakulam district, in India’s south-eastern state of Andhra Pradesh on Tuesday.

Pictures and video on social media showed local villagers and fisherfolk hauling the chariot out of the water, with the help of ropes tied around it.

Once out of the water, people gathered around the chariot, admiring its structure, footage shared to Twitter showed.

According to a sub-inspector of Naupada area in the district, higher authorities had been informed and they had begun an investigation.

“We have informed Intelligence and higher officials,” the policeman said.

Andhra Pradesh had been battered by incessant rains due to the brewing cyclone.

The weather system was thought likely to weaken into a depression and drift back into the sea by Wednesday evening.

In the coastal districts of Guntar and Krishna, a red alert had been sounded for possible heavy to very heavy rainfall.

Meanwhile, a ‘yellow’ alert had been issued in Srikakulam, Vizianagaram and Godavari districts.

Chief minister YS Jagan Mohan Reddy has told all local administrations of the coastal districts to be on high alert, bracing for the impact of the cyclone.

In a meeting with the district collectors, Mr Reddy was told that a total of 454 rehabilitation camps were set up in different parts of the state. Earth movers were kept on standby, he was told.

Cyclonic Storm Asani has brought winds of 100 to 110 kph (62 to 68 mph) and higher gusts to the Bay of Bengal, making it equivalent to a tropical storm.

According to CNN reports, the storm was the second to impact India this season.

The first storm, which hit southern India in March, was not named.