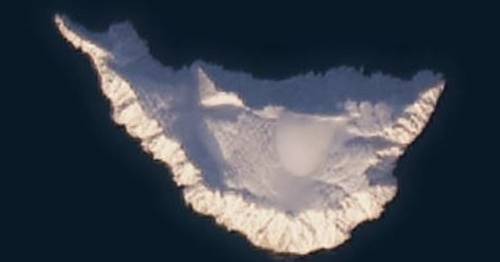 Mystery surrounds why a tiny island in the Arctic has vanished from Google Maps, amid speculation that it could be a secret Russian military base.

People searching for Jeannette Island on the global giant’s digital map report seeing it only as a red pin on the regular chart, or as a sinister black smudge when zooming in satellite mode.

This curious blurring of the 0.2 square mile ice-covered outpost in the East Siberian Sea, with a 1,152-foot peak in its centre, was first observed in 2018.

Google has been approached by users for an explanation but has so far declined to comment, according to news.com.au .

A NASA image of Jeannette Island
(

That continued silence, as well as a historical debate over whether the island belongs to the USA or Russia, has fuelled conspiracy theories about why the island could be significant.

Other deliberately blocked out locations on Google maps are usually associated with military activity, such as German air bases, Russian missile stores and Afghan bases.

One Reddit user wrote: “Google rarely blacks out without reason.

"A search through google earth shows that this has been permanently blurred out – even in images dating back to the 1980s.

“But what really gets me is that Jeannette Island is completely non-notable… or at least supposedly.

“I’m going to guess there’s a concealed Russian military base located there, and possibly quite a substantial one at that.”

Russian military officers on parade – could Jeannette Island be a secret military base?
(

The story of Jeannette Island goes back to 1881 and its discovery by the explorer and American naval officer George E De Long.

He was attempting to navigate his ship USS Jeannette towards Wrangel Island and the open seas of the Arctic Ocean close to the North Pole when it got trapped in an ice pack in September 1879, drifting hundreds of miles off course for 18 months.

De Long’s party eventually managed to land on the remote island in May 1881, planting the US flag and naming it Jeannette after their vessel.

The enclave, around the same size as Vatican City – the world’s smallest country – was claimed as part of the Russian Empire, along with several other Arctic Islands, following the Imperial Russian Arctic Ocean Hydrographic Expedition of 1910-1915.

The Soviet Union later reasserted possession of this second smallest of the De Long archipelago that is now administered by the Sakha Republic of the Russian Federation.

Although some American citizens believe Jeannette, and the other De Long islands, should be reinstated as part of the USA, the Government has never contested ownership.

Images of the island were provided to Google by the The International Bathymetric Chart of the Arctic Ocean, a project to map the Arctic Ocean initiated in Saint Petersburg, Russia.

Another, more technical, theory about why the island is missing from Google Maps comes from Bellingcat , saying it has nothing to do with censorship or anything sinister.

They put the phenomenon down to an error with the satellite imaging programme when data is lost on transfer and replaced with various colours and shapes.

Previous : The push for inclusion in the abortion rights movement
Next : Mum’s warning over ‘chilling’ Facebook holiday scam after being duped by ‘sociopath’