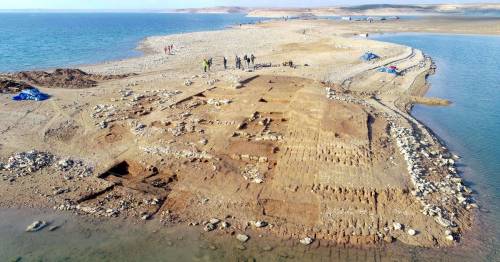 An ancient palace city has been discovered underwater after a reservoir was drained in the Middle East.

Photos show incredible ruins believed to be the lost city of Zakhiku which was the centre of the Mitanni empire 3,400 years ago.

Archaeologists have mapped out the settlement which dates back thousands of years.

It emerged from the waters of the Tigris River when part of the Mosul dam reservoir was drained in what is now Iraq.

The country is one of the worst hit by climate change, with temperatures soaring to as high as 45 degrees, leaving residents with no other choice but to pull water from the reservoir for irrigation.

A restorer working on the writing tablets
(

The walls of the ancient storage building
(

Walls measuring 10 feet high from thousands of years ago were found still standing, despite being made of sun-dried mud and submerged in water.

This is possibly due to an earthquake which turned the upper parts into rubble serving as a protective cover over the centuries, according to the Smithsonian Institution.

Funding for the dig was organised by Freiburg University and the University of Tübingen in Germany.

Pottery vessels where the writing tablets were stored
(

Dr Ivana Puljiz, assistant professor of archaeology at Freiburg, said the ancient building used thousands of years ago was of particular importance.

"Enormous quantities of goods must have been stored in it, probably brought from all over the region," she added.

While Peter Pfälzner, an archaeology professor at Tübingen University, said the survival of the writing tablets was “close to a miracle”.

Vibrant blue and red wall paintings, as well as a palace with 22ft high walls were also discovered at the site.

Researchers hope the latest discovery will offer more information about the fall of the city and shed more light on the daily lives of its residents.

The Mittani Empire once reached across from the Zagros Mountains in Iran to the Mediterranean.

First founded by the IndoIranians of Mesopotamia and Syria, many battles were fought over the control of Syria with the Egyptians until a truce was agreed.

The ancient buildings are being measured and archaeologically documented
(

In 2016, adventurers and treasure hunters found what was believed to be a sunken city discovered off the coast of Greece.

The site, which consists of doughnut-shaped structures and paved floors is actually just a naturally-occurring geological phenomenon, scientists determined.

Discovered by divers close to Alikanas Bay in Greece, the site was believed to be the ruins of a lost civilization hidden beneath the waves.

At the time, Professor Julian Andrews said: “The site was discovered by snorkelers and first thought to be an ancient city port, lost to the sea.

"There were what superficially looked like circular column bases, and paved floors. But mysteriously no other signs of life – such as pottery."

Previous : Skeleton Coast with 500 shipwrecks, lions prowling the beaches and 11 types of shark – World News
Next : ‘Biggest rail strike in modern history’ WILL go ahead next week after pay talks break down