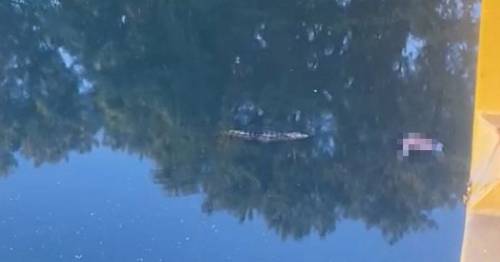 A murder investigation had to be halted after an alligator made off with the dead man's body.

The corpse of the unnamed dead man had been reported to police after it was seen floating in a Brazilian watercourse last week.

Officials turned up together with fire crews but when they arrived at the Arroio Fundo watercourse, in an area to the west of Rio de Janeiro, on June 3, they could not find the body.

Video footage later emerged showing a body floating on the surface, and an alligator swimming around with its nose on the body.

That body was later later dragged to the bottom of the water. 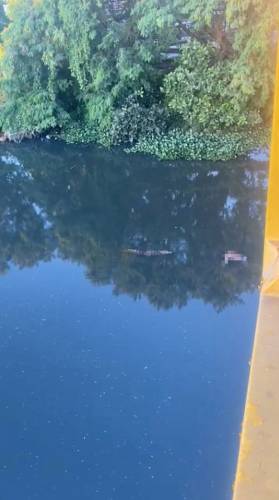 Officers are continuing to investigate the dead man
(Image: CEN)

The corpse was eventually recovered more than 24 hours later after firemen returned to continue their search.

The fire service said they had managed to recover the body without any injuries despite the fact that the alligator was still swimming around in the water.

The authorities then took the body to the Legal Medical Institute (IML) to undergo an official autopsy as part of their investigation into the death.

One firefighter told local media: “We are used to seeing alligators in that area, generally while rescuing other animals, so we already knew how to deal with situations like this.”

The investigation into the man’s death continues and there have been no further updates on the autopsy results or what damage was caused by the alligator after dragging the corpse to the bottom.

Alligators typically drag their victims to the bottom to kill them by drowning and will store any kills there to eat later.

Although it is believed that on this occasion the corpse was mostly intact.

Previous : Los Angeles Lakers’ LeBron James to change jersey number from No. 23 to No. 6 next season, source says
Next : Japan’s Suga to compile big stimulus package around summer – Nikkei