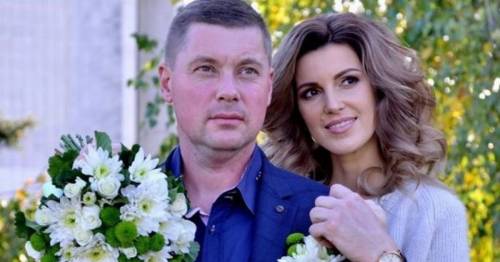 A mum has told how she was kidnapped along with her one-year-old baby by Russian troops and held in horror conditions after her husband and 12-year-old daughter were killed by shelling.

Viktoria Kovalenko said that she and her baby Varvara were held captive in a basement of a school and saw people dying around her as there was no medical care.

People used coal to write the names of the dead so that they could be put on their graves.

She and her family were trying to escape fighting in Chernihiv, in the north of Ukraine, last March when their car was hit by Russian bombing.

Her husband Petro, 40, was killed as was her daughter Veronika, 12, and the next day she and her baby were taken by Russian troops who detained them in a school basement in Yahidne along with 40 other Ukrainians.

Viktoria told the BBC : "It was dark, it was dusty, there was no air or windows – it was for storage, not for humans. It was intolerable at times. We had people aged over 80, who were really poorly and suffocating from the lack of oxygen.

"In our room, we were writing with a piece of coal, the names and dates of people who died, so we could put it on their graves. Twelve people died in the basement.

"I thought of nothing, I was in shock, I tried to block all emotions. I was just speaking to people, but my whole being was concentrated on surviving."

People were not even allowed to go out to use the toilet with just buckets there for them.

It was in these horrendous conditions that Viktoria said she tried to come to terms with the death of her husband and daughter while also realising she needed to keep strong for her baby.

She asked the Russians to bring their bodies to her so she could bury them and finally she was given permission.

Viktoria said that the bodies were barely recognisable as human and practically nothing was left from the burnt out car.

"It was the 12th of March. They called me and said, 'Let's go, and you will see where they will lay down.' They were buried in the forest, in two graves, one box was bigger, one box was smaller. And two crosses with signs," she said of when they were finally allowed to see the graves.

"We stayed and started to cover the boxes with earth, but shelling started, so we ran away before we had finished burying them. It was very frightening."

After spending 24 days detained the Russians began their retreat from the north of Ukraine and she was able to flee with her baby to Lviv in the west of Ukraine.

The car was totally destroyed by the Russian bombing
(

Viktoria is now stuck in Poland and has waited nearly 50 days for a UK visa, already having a sponsor, it is reported.

"I'm currently in Poland and it's getting hard for me," she said. "I need to be on the move, not to remember it or revisit the events in my memories, and just not to think about it."

A government spokesperson told the BBC : "Together our uncapped Ukraine Family Scheme for Ukraine routes are among the fastest and biggest visa schemes in UK history.

"124,400 visas have now been issued showing the work we've done to speed up the process is working and improving daily."

The Mirror has contacted the Home Office for comment.