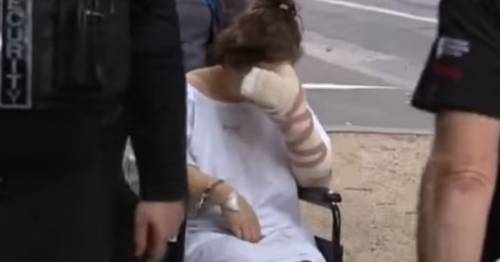 A mum allegedly cut off her boyfriend's genitals after knifing him and his friend to death in a frenzied attack.

Jasmine Everleigh, 44, has been charged with murdering her partner Samir Esbeck, 59, and his pal Sarkis Abboud, 61, in a stabbing frenzy in the early hours of Thursday.

Australia's 7NEWS reports Everleigh allegedly stabbed Mr Esbeck before cutting off his genitals, after the pair had been together for 10 years.

Mr Esbeck died at the scene in an apartment in Brunswick, Melbourne, Australia, while Mr Abboud died on the way to hospital.

Everleigh was later arrested on a nearby tram in the suburn of Calton just before the morning commute began, and was found to have suffered cuts to her arms.

Acting Assistant Commissioner Mick Frewen told local media: "She was bleeding and had a fair bit of blood on her."

She was taken to hospital before being interviewed and charged with two counts of murder by police on Friday.

Mr Abboud’s daughter has released a heartbreaking tribute to her late dad.

Christine Abboud wrote on social media: “No one deserves this kind of pain left with them.

“My father was my hero, a loving husband and brother to his family.

“My heart feels empty knowing I won’t ever see him again … Dad, I love you.”

Everleigh was seen on CCTV shirtless and in a bra walking down the street with a shirt wrapped around her hand, reportedly after the alleged stabbing.

He shoes were allegecly covered in blood.

Everleigh on CCTV walking the streets
(

She was said to have ran across several streets and into alleyways.

She was said to have left long trails of blood in streets surrounding the area where the alleged stabbing took place.

A murder has been launched and the apartment has been cordoned off, while a strip club about 350m away was also taped off.

Police reported there were multiple sites they would be looking at.

Two days ago police said Everleigh was arrested after getting on a Melbourne tram covered in blood.

Paramedics had been called to the apartment around 5.20am on Thursday.

Police believed Everleigh and Mr Esbeck lived together at the apartment.