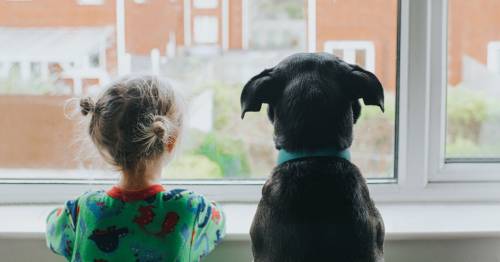 A mother has been slammed online after considering denying her daughter the opportunity to say goodbye to her elderly dog before it was put to sleep.

The Reddit user explained to the internet that her ex-husband – father to their nine-year-old daughter – has an elderly rescue dog who was set to be euthanised.

And she was reluctant to let her ex-partner pick their daughter up a day earlier than usual to say goodbye.

However, it was met by a resounding scorning from other Reddit users, who branded her "cruel and unreasonable".

The user wrote : “My daughter loves this dog, and I've tried to indulge that as much as possible and the days I have her (her dad) will let (our daughter) video call with him and the dog which I think is a bit extreme but to each their own.

Stock image: The ex-husband had asked to pick his daughter up a day early to say goodbye to the dog
(

“(Her dad) contacted me this morning saying that he had to put the dog down tomorrow, and asked if he could pick up (our daughter) a day early so she could say goodbye.

“I told him I didn't want to do that and didn't think it was a good idea to go against court ordered custody, and since he wouldn't watch her when I had a work emergency I didn't see why this was different.”

The ex-husband reportedly told the user she was being "dramatic, petty and cruel" for preventing the farewell, but the mother refused to believe she was in the wrong, staying rigid to the court order.

She added: “He's sent me several texts saying that I should let (her) be there, and even told her what was going on which IMO was overstepping and I don't think it's right for him to contact her behind my back about something involving our co-parenting.

“(She) is also upset at me now, and I'm wondering if I'm being an a**hole now that she knows.”

Out of nearly 2,500 comments, the overwhelming support was for the dad and daughter.

One said: “What if a relative died? 'Oh sorry, can't go to the funeral. It's not on the schedule'. These are the things that drive kids apart from their parents.”

Another described the situation as "unfathomably cruel".

“She wants revenge on her ex,” said a third. “It's about control. Her spite is more important than her kid's emotional well being.

“You should bring her to say goodbye to the dog if you don't want to blur the custody order. The important thing here is that your nine-year-old should be given the opportunity to say goodbye to a beloved pet and process her grief.”

Users recommended prioritising her daughter’s best interests, and letting her see the dog one last time.

Another said: “You are still a team, and treating this so strictly if there is your daughter's emotional well-being at stake, yes, you are being cruel and unreasonable.

“Your daughter being upset at you should tell you enough, other parents would be elated to see their ex-partner trying to be so productive and caring for their children's well-being.”

Thankfully, the parent edited her post and said she had seen the light and agreed to let her child see the elderly dog.

The 29-year-old updated the post to say: “I thought about it some more and read some of the replies and I realised I was being short sighted and taking out my frustration from the past in a way that would only negatively affect my daughter.

“I've talked to (her dad) and we've made the agreement that he will pick her up tomorrow to say goodbye and drop her off a day early.”