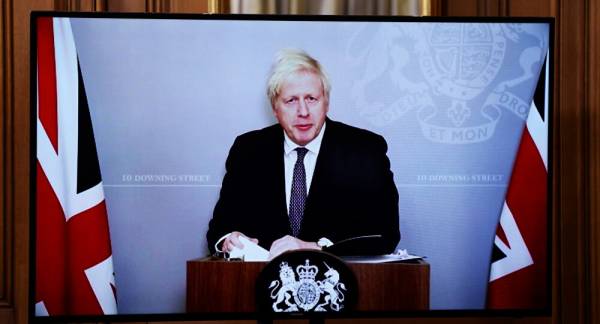 The British economy is expected to shrink by 11.3 percent this year and the COVID-19 pandemic continues to claim lives in the UK. So bleak is the picture that an eight-year-old boy wrote to Boris Johnson and asked him if Christmas was cancelled this year.

UK Prime Minister Boris Johnson has promised Britain’s children: “Father Christmas will be packing his sleigh and delivering presents this Christmas. I have put in a call to the North Pole.”

I’ve had lots of letters about this, so I have spoken with experts and can assure you that Father Christmas will be packing his sleigh and delivering presents this Christmas! pic.twitter.com/pXwcjHSxZg

​The prime minister shared a picture of the letter had received from an eight-year-old called Monti.

Monti wrote: “If we leave hand sanitiser by the cookies can he come? Or will he wash his hands? I understand you are very busy but can you and the scientist please talk about this.”

Johnson replied: “Leaving hand sanitiser by the cookies is an excellent idea to help prevent the spread of the virus, and using it yourself, and washing your hands regularly, is exactly the kind of thing which will get you and your friends on the nice list.”

When will you learn not to make promises you can’t keep @BorisJohnson? For many of the children of #ExcludedUK 2.9m taxpayers, Santa will not be visiting this year. @RishiSunak discriminated against swathes of UK workers, who simply ask for parity of support #peoplebeforepolitics

​But the tweet triggered more than 3,000 responses on Twitter, the vast majority of them hostile to the prime minister.

One social media user, referring to the lack of a Brexit trade agreement with the EU, replied sarcastically: “Tell ‘Monti’ that this will be the last year that Father Christmas will be visiting, as his home in Lapland is in an EU state, and any future imports post-December 2020 will have to wait in customs for 3 weeks.”

Lorraine O’Mahoney tweeted: “Dear Santa, Please get rid of this Prime Minister and his awful government and bring in people who are honorable, not into chumocracy, and who have the interests of the country at heart.”

So negative was the response that one Twitter user referred to them as “mood hoovers”.

Some of the comments on this!
A post, after all about a child’s letter wondering if Santa can visit this year.
All that is wrong in the UK and Twitter in one thread. Why be positive when negative is available?
Mood Hoovers everywhere .

On Tuesday, 24 November, the government announced a relaxation of quarantine rules in England, saying three households would be allowed to gather in a house on Christmas Day.