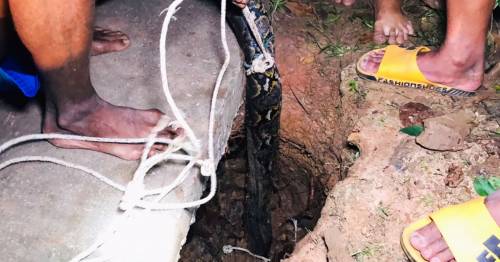 Dozens of villagers saved their "chickens and piglets" from being devoured after capturing a 16ft-long python by dragging it from a drain its massive body got stuck in.

The snake was spotted slithering across the road by one of the residents on January 7.

The woman climbed down from her car and approached the large reptile to record a video.

However, the car's headlights attracted dozens of villagers, who crowded over to take a glimpse at the massive animal.

The startled snake tried escaping through the drain, but its thick body was stuck in the hole.

The villagers used ropes and pieces of bamboo to pry the python loose, but it was still lodged in the drain's opening.

As a last resort, the villagers held onto the snake's body and tried to drag it out.

After a few moments, the python was successfully pulled out from the hole in Phattalung province, southern Thailand.

Onlooker Nok Panthong said: 'I'm glad we managed to pull it out and free it somewhere far away from our neighbourhood.

"If it stayed here, it'd be eating the chickens and piglets."

Another beastly reptile wreaked havoc in Thailand last month when a monster lizard terrorised a family when it prowled through their door and into their living room.

They placed the snake into a fertilizer bag before freeing it to the wild.

Villagers were scared the beast would devour their chickens and piglets
(

The giant creature darted across their sofa – just inches from the family's sleeping grandma.

The family were preparing for dinner when the large reptile emerged from a nearby canal and snuck into the property in Samut Prakan province, Thailand.

CCTV footage shows a woman bringing in food when she spotted the venomous monitor lizard inside the room.

It shocked those inside the property and came within inches of an elderly woman who was stretched out on the couch.

The 5ft-long creature terrified the residents as it ran for the exit, sprinted across the sofa and brushed a grandmother was resting and was awoken from her slumber.

Previous : Italian prince branded ‘stingy’ by ex after though he ‘showered her with lavish gifts’ – World News
Next : Analysis: Venezuela opposition gains hope from win in ruling party stronghold