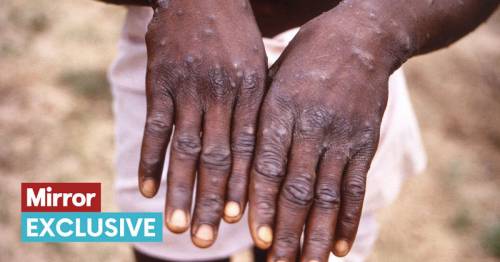 Cases of monkeypox are being reported across the globe including the UK – but how worried should we be?

This is not a new infection and has been known for decades, originating first in 1970 in the Democratic Republic of the Congo and is endemic in parts of Africa.

But the sudden spread of cases has caused alarm and is unexpected because of its wide geographic spread.

The World Health Organization (WHO) is convening a group of leading experts in an emergency meeting today to discuss the ongoing outbreak.

The latest cases reported on Friday are in France, Italy, Sweden and Australia – and cases have doubled in just one day in the UK

Following the confirmation of cases in the US, Spain and Portugal on Wednesday, as well as the investigation of 13 suspected cases in Canada.

Dr Bharat Pankhania, a senior consultant in communicable disease control and senior lecturer at the University of Exeter, spoke to The Mirror about whether we should be worried.

Cases of monkeypox are being reported across the globe
(

Why has monkeypox been thrust into the limelight?

Dr Pankhania says monkeypox has been thrust into the limelight because we suddenly have got a smattering of cases in several European countries.

He told the Mirror: "It's rare because these outbreaks are often sporadic and confined to West Africa or Central Africa — it happens there and finishes there."

While it is not likely to trigger another Covid-like pandemic, it is probable it will continue to spread.

"Monkeypox is one of those where the mode of transmission is dual, so it can pass between animals or humans," he continued.

"As a result of rapid international transport and travel, what happens in one place doesn't stay in one place, but it moves very quickly to another."

Symptoms of one of the first known cases of the monkeypox
(

Matthew Ferrari, director of the Centre for Infectious Disease Dynamics at Penn State University, told the Telegraph that while this may not manifest as a large-scale catastrophe, this is a "stark reminder that emergence events are not black swans and we must plan accordingly".

Dr Pankhania said: "We need international disease surveillance, disease management and disease resources because whatever happens in one part of the world, very quickly can become a problem in another part of the world."

So how did it spread?

The virus has likely been spreading undetected for some time.

"Someone has either gone on to or returned from West or Central Africa and then in their network of friends passed on the infection while they were incubating it," Dr Pankhania said.

Some cases have been confirmed as links with travel to the region, but not all, meaning the others caught it from domestic spread.

Bill Hanage, Associate Professor of Epidemiology at Harvard University, said on Twitter: "Folks don't expect to see monkeypox and so don't diagnose it.

"On the bright side, this implies that the severity of the infections are not extremely high or we would have noticed sooner. On the gloomier, it means there are multiple transmission chains out there already."

Monkeypox is related to smallpox with similar symptoms, but with a more severe rash.

Generally, after one to three days, a distinct bumpy rash begins to develop.

He added that it's very rare for smallpox pustules to lead to secondary scarring, same with chickenpox.

Whereas with monkeypox, it is entirely possible that you could get secondary scarring.

He continues: "This will be limited and generate a few clusters and then it will go away.

"My expert and the considered view is that this is not something that will spread as it doesn't go down the aerosol route therefore it is much easier and entirely possible to contain it."

The palms of a monkeypox case patient
(

How high is the risk?

The monkeypox risks to the public are extremely low and even lower than smallpox.

Boghuma Kabisen Titanji, a Cameroonian physician and clinical researcher, says monkeypox is a rare zoonosis [an infectious disease that has jumped from a non-human animal to humans].

She wrote on Twitter : "In general it is a self-limited virus and transmits poorly between humans."

Dr Pankhania said there is cross-immunity from smallpox immunisation and jabs which were widely delivered to eradicate smallpox are up to 85 per cent effective against monkeypox.

But smallpox immunisation stopped 40 years ago.

A 2019 meeting at the Chatham House thinktank in London suggested that an unintended consequence of smallpox eradication could be that “emergent or re-emergent human monkeypox might fill the epidemiological niche vacated by smallpox”.

Dr Pankhania highlights the use of antiviral drugs "and they can be given if needed, but in most cases, no antivirals or any other intervention will be required".

Is it a sexually transmitted disease?

Numerous cases have been found in men who are gay, bisexual or who have sex with men – leading to speculation that the disease is a sexually transmitted one.

But Dr Pankhania quashes these rumours, adding: "Any activity that involves close person to person contact can result in transmission and one route of getting it is sexual contact.

"So it can be heterosexual or homosexual bodily contact. We should not be saying it is something to do with only men who have sex with men."

How are we to manage outbreaks in the future?

"Well, we really need to live in harmony with nature and stop deforestation", Dr Pankhania said.

He explains that by cutting down forests, you start living in the jungle, at the boundary of animals and humans.

Then you're going to come in contact with animals that can give you those infections.

He continues: "We need to stop messing around with nature. We need to advise and inform and educate people about the dangers of eating bush meat, and so on."