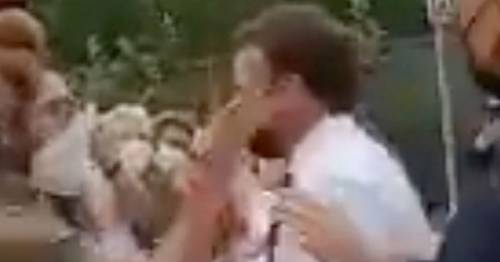 Emmanuel Macron has been slapped in the face by a man while out meeting crowds in France.

The president, 43, was attacked by the unidentified assailant on Tuesday afternoon in Tain-l'Hermitage, a town in the south east Drome region.

Macron, dressed in shirt sleeves, could be seen walking towards a crowd of well-wishers who were behind a metal barrier in a video posted online.

He then reaches out his hand to greet one man in a green t-shirt, with glasses and a face mask.

The man can be heard shouting out "Down with Macronia" ("A Bas La Macronie") – before he slaps Macron's face. 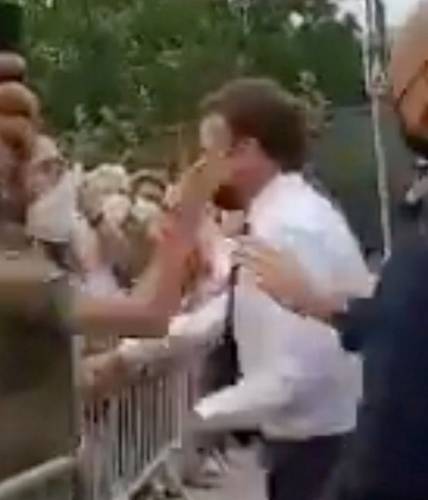 Two of Macron's security detail then tackle the man in the green T-shirt, while another ushers the target away.

The president remained in the vicinity of the crowd for a few more seconds, and appeared to be talking to someone on the other side of the barriers.

His administration said there had been an attempt to strike Macron, but declined further comment.

The identify of the man who slapped Macron, and his motives, were unclear.

While slapping the president, he could be heard shouting "Montjoie Saint Denis," which was the battle cry of the French armies when the country was still a monarchy.

A witness said: "Mr Macron appeared very relaxed and thought he was getting a good reception from those watching him.

"He was outside a catering school when he stuck his right hand towards a man who promptly grabbed it.

"Then the man slapped the president in the face, before Mr Macron was pulled away by security guards."

There was further shouting and swearing as Macron was bundled away, the witness said.

A local police spokesman confirmed that two men had been arrested at the scene of the attack. 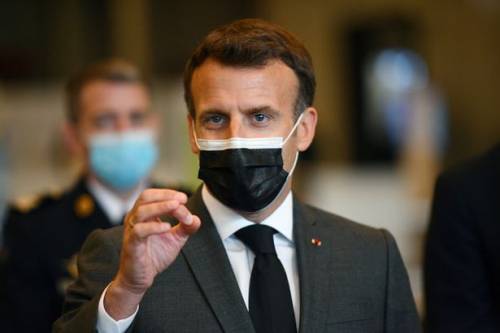 "One is thought to have described himself as an anarchist, but an enquiry is ongoing" said the spokesman.

Macron was on the second stage of his 'Tour de France of the territories,' said an Élysée Palace spokesman who added: "He was not seriously hurt in the incident."

The tour is being held before regional elections in two weeks, and less than a year before a presidential election in 2022.

French Prime Minister Jean Castex has said the incident was an affront to democracy.

It comes ahead of Macron attending G7 meeting of the world's leaders in Cornwall this weekend which has seen heightened security in the south west of England.

And the incident is not the first time that Macron has been attacked by angry crowd members while out in public.

In 2016 – before he became president a year later – Macron was pelted with eggs by Communist Party members outside a post office in the Paris suburb of Montreuil.