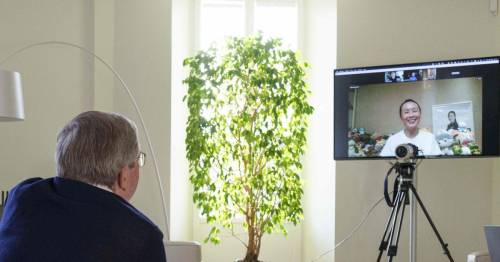 The missing Chinese tennis star Peng Shuai has told the International Olympic Committee she is "safe and well" during a video call.

The 35-year-old former world number one doubles player has not been seen in public since making an allegation of sexual assault against former Chinese Communist Party vice premier on November 2.

Since then there has been growing concern globally, with stars such as Andy Murray, Naomi Osaka and Serena Williams expressing support.

But in a statement, the IOC said Peng had spoken to president Thomas Bach for 30 minutes and explained "she is safe and well, living at her home in Beijing, but would like to have her privacy respected."

Athletes Commission chairman Emma Terho and IOC member Li Lingwei, a former vice-president of the Chinese Tennis Association also joined the call, which is believed to be Peng’s first contact with sports officials outside China since she disappeared.

The IOC has been criticised for not taking a stronger stance on the issue ahead of February's Beijing Winter Games.

Peng "gladly accepted" an invited from Bach to join him at a dinner in the Chinese capital in January.

Terho said: “I was relieved to see that Peng Shuai was doing fine, which was our main concern.

“She appeared to be relaxed. I offered her our support and to stay in touch at any time of her convenience, which she obviously appreciated.”

Peng has not been seen since posting a lengthy post on Chinese social media site Weibo in which she alleged Zhang Gaoli, 75, had forced her into sex after inviting her to play tennis with his him and his wife three years ago.

The post also claimed the pair had a consensual affair before the incident but Zhang cut off communication as he rose through the ranks of the CCP.

It was deleted after half an hour an any mention of the US Open semi-finalist was taken off Chinese websites, with some reports claiming even the word tennis was censored.

Since the post she has not been seen but an email, signed by her, claimed she was safe and the allegations had been made up.

Then, on Friday, state media released three pictures of her wishing fans a happy weekend while video clips of her appearing at tennis tournaments and in a restaurant have done little to ease concerns.

The UN, US, UK and France have demanded "verifiable evidence" of her whereabouts while the Women's Tennis Association has threatened to pull all tournaments.

The CCP has a history of heavy-handed oppression of any voices of dissent.