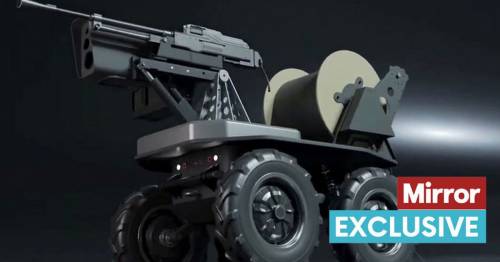 Mini “terminator” robots are being pitched into Ukraine’s bloody battles against Russian assault troops, The Mirror can reveal.

The armed war machines – fitted with a 7.62 assault machine gun and running on wheels- is already believed to be on the frontline.

Ukraine company Temerland has prototyped the metallic killer on wheels to be used on scouting missions against Moscow’s invasion forces.

It is understood the first version of the 110lb in weight and two foot long drone called a GNOM is controlled by troops who can be hidden hundreds of feet away.

They are using the robot or Unmanned Ground Vehicle as a surveillance platform and to transport small pieces of equipment but it is being adapted as a killing machine.

It is believed it was first deployed to the south east Ukrainian city of Zaporizhzhia, one of the last bastions of Ukraine defence in the embattled region.

Hundreds of thousands of refugees have in recent months fled to the large city, which is now ringed by deep defence trench lines as troops prepare to fight off Russian attackers.

But the GNOM may play a key role as a highly-sophisticated computer “neural” software inside enables the machine to learn patterns and tasks so they can be repeated.

Sources say it is currently controlled by a wire which cannot be seen from above and that the machine’s technology makes it virtually undetectable.

The GNOM robot carries a 7.62 machine gun, the same calibre as an AK47 assault rifle

The 7.62 mm assault gun it is fitted with is the same large calibre machine as an AK47 rifle, commonly used by both Ukrainian and Russian troops.

And its electronic engine drives a 4×4 wheel system allowing it more easily to traverse the rough terrain of urban or countryside battlefields.

It has apparently been deployed to the frontline in Ukraine's stricken region of Zaporizhzhia, according to Ukrainian manufacturers Temerland

A security source told the Daily Mirror: “The technology does exist already in bomb dispoosal machines, offering the controller the ability to see and direct a machine towards the threat.

“Such machinery has become extremely sophisticated but it seems this GNOM is designed silently to approach the enemy positions directly and spy on them, possibly allowing them to direct artillery onto the target accurately, or to launch and effective ground assault.

“This would also give the operator a distinct advantage in saving the risk to life of defending troops and, if the surveillance package is sophisticated enough, allowing the gun to open fire either lethally or as a diversion whilst some other attack is launched.”

Previous : Vladimir Putin’s war machine will see world become ‘hell on earth’ if not stopped – World News
Next : Camilla Barker-Bones needs home after ending up in kennels over Jubilee weekend