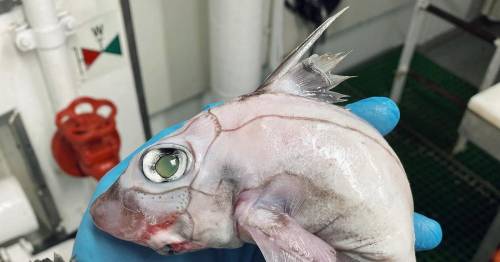 A fisherman has stunned social media with a rare deep ocean find – a terrifying fish with burst eyeballs, a mouth full of sharp teeth and a scaly tongue.

Roman Fedortsov has devoted his life to searching for unknown creatures as a deep-sea fisherman working on a trawler in Murmansk, northwest Russia.

He spends months of his life at sea, much to the delight of his 649K followers on Instagram where he often shares snaps of frightening looking creatures from the depths he’s found.

In his recent capture, the scary-looking fish can be seen with yellow eyes with no pupils.

The silver-scaled fish also has its mouth open, revealing its teeth and its scaly-looking tongue.

Roman's post racked up more than 5,700 likes with social media users spooked at the discovery.

One user said: "I wonder if their eyes look different at the correct water pressure, but get all weird and squishy when they’re pulled to the surface."

A third joked how its resemblance matched that of the "average 40-year-old British male".

“The stuff nightmares are made of”, added another viewer.

Another spooked follower wrote: "My god, that looks like something out of Alien."

The fisherman shares pictures of his finds on social media
(

Fans are fascinated by the boggle-eyed creatures
(

Roman’s other finds include a parasite that had latched onto a fish's eye and a “Frankenstein fish”.

The deep-sea creature appeared similar to a cartoon with big bulging eyes, translucent fins and a thresher-like tail.

Other bizarre findings include a wolffish, sea snakes, a lost shoe and a mermaid's purse.

Roman spotted the underwater pouch among seaweed on the beach.

Also known as egg cases, they are protective pouches where eggs develop into baby sharks and skates inside.

"Perhaps in the past, some people believed that they were indeed purses or bags for the treasures belonging to a mermaid," he said.

"But we now know that they hold very different kinds of treasure.⁣⁣"

Previous : Prince William’s medals and what they stand for as he turns 40 with Kate and kids
Next : Gunman caught on CCTV as he storms petrol station and targets man cradling baby