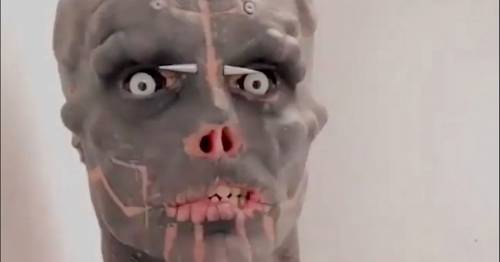 A man dubbed the world’s “most modified man” has chopped off two of his fingers, turning his hand into a claw, as part of his bid to become a “black alien”.

Anthony Loffredo is hell-bent on his mission to transform his appearance, having already split his tongue, cut off his nose and covered himself in tattoos and piercings.

However, the 33-year-old, from France, said he has so far only achieved 34 per cent of his desired transformation.

Anthony, who had his upper lip removed earlier this year, has been undergoing extreme body modifications for around a decade now, undergoing huge risks such as going blind whilst undergoing procedures like eyeball tattooing.

He also previously had both his ears surgically removed in order to look more extra-terrestrial and underwent tongue-splitting, it was reported.

The Frenchman has travelled far and wide for his various procedures, heading to Spain last year to have his nose surgically removed as the operation is illegal in his native country.

He has also had dermal implants put in his face, which gives his skin a bumpier texture and has created chiselled lines across his cheekbones.

Anthony around a decade ago, before he began his dramatic transformation

Anthony documents his transformations on his Instagram account, Black Alien Project, repeatedly shocking his 718,000 followers with the lengths he is willing to go to to change his appearance.

Images of his latest body modification, the creation of an “alien claw”, were shared to his page post-surgery, showing a bloody stitched up scar on his hand, alongside the caption "I develop my inner peace", the Sun Online reports.

His controversial body modifications frequently divide his followers, with some questioning his motives, while others praise his boldness.

Earlier this year, Anthony had his upper lip removed

One person wrote: "This is disturbing AND fascinating at the same time. don't think I could do this, but thumbs up to you for living your dream."

Another commented: "Congratulations on moving forward with the project. it is incredibly wonderful."

"Blatant disrespect to those that are unfortunate to have lost limbs and look for ways to function as the human body should," a critic said.

"You’re 100% going to regret this one eventually,” another added.

Anthony has had dermal implants put in his face, which gives his skin a bumpier texture

In 2017 Anthony told French newspaper Midi Libre that he had been “passionate” about mutations and transformations of the human body from a very young age.

"I had a click when I was a security guard,” he said.

"I realised that I was not living my life the way I wanted. I stopped everything at 24 and left for Australia.

"It has become normal, even unconscious, to constantly think about my plans for the next few months."