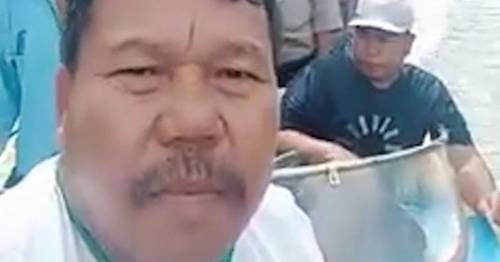 Devastated friends of a man who failed to surface when playing in a river discovered his half-eaten body after watching a crocodile drag him under.

The remains of the villager was discovered after being attacked by the beast in Indonesia.

The 37-year-old victim, named only as Kamaruddin, 37, was reported missing after he dived into the Lop River in North Penajam Paser Regency in East Kalimantan on June 14.

His friends say they saw a crocodile drag him under the water when he was cooling off.

Locals and concerned relatives launched a frantic search, scouring the river on motorboats for any trace of Kamaruddin.

Crocodile attacks are not uncommon in Indonesia (stock photo)
(

It wasn't until the next day that they finally found a lead, when one resident smelled a foul scent wafting in the air.

With trepidation, they followed the terrible stench upstream, and were greeted with a stomach-turning sight.

Lying among the mangroves were torn pieces of Kamaruddin's body.

A large crocodile was seen feasting on his mangled remains, with his entire lower half missing, rescue personnel said.

The sated beast quickly fled as the team approached.

Marjani, head of the Regional Disaster Management Agency of North Penajam Paser, said: "The victim was found by his family, who did an independent search. He was found on Wednesday June 15 evening at around 11.30pm local time.

"The body has been retrieved and turned over to the family for burial."

Following the tragic attack, authorities warned the locals to be vigilant when doing activities in the river.

It's not the only crocodile attack this week – and drunken man very nearly regretted getting up close.

The croc tried to drag him into a lagoon after he threw stones at the reptile.

The beast, which was said to have been provoked by the man, grabbed his leg between its jaws and pulled him towards the water.

Video footage of the horrific incident was filmed on the banks of the La Encantada lagoon in the Gaviotas neighbourhood of the city of Villahermosa, south-eastern Mexico.

It shows the man hurling stones at the croc which responded even more aggressively.

The director of the municipal Civil Defence, Jose Arturo Gomez Ascencio, said the man, who was not named in local reports, was inebriated and had "provoked" the reptile.

Gomez Ascencio said: "The person who was apparently attacked was throwing stones at it and was drunk.

"These animals are in the reproductive stage; they have eggs and the animal felt attacked and reacted."

The crocodile, a female, apparently bit the man's leg, causing him to fall to the ground – as seen in the footage – to prevent him from disturbing its nest.

It is not known if the man was injured in the incident, as onlookers interviewed by local media said he left the scene alone on foot.

Later that same afternoon, personnel from the Fire Department went to the scene to secure the crocodile and its eggs.