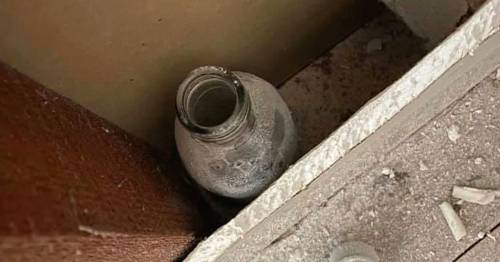 A man renovating his home has found a mystery letter in a bottle from builders left nearly 50 years ago telling what life was like back in 1974.

Matt Streatfeild, from Newcastle, New South Wales, in Australia, came across the message from the past as he knocked down two walls in his home as part of a renovation.

Intrigued he opened the letter dated April 5, 1974, and to his surprise found it was written from the plasterers who built the walls.

It was meant to give future generations an idea of what life was like back in the mid-1970s.

"You always hear the legend of messages in a bottle, but you never think you'll find one in between two walls in your own house," Mr Streatfeild said.

The letter said the workers from Newcastle Interior Linings, which still exists today, earned $106 (£57) each week and that the bottle was one of the first measured in metric being equal to a “one imperial pint”.

The workers were also listed and Mr Streatfeild was able to track down Ron Niddrie, one of the plasterers who is now aged 66.

"One of these little mementos has paid off," Mr Niddrie told NBN News..

"The fact that it was 47 years ago was even more of a shock."

Mr Streatfeild was able to track down Ron Niddrie, one of the plasterers who is now aged 66
(

“The bottle is one of the early metric, as we are beginning a metric conversion, it is equal to one imp pint.”

Mr Streatfeild now says that he will now put the bottle back behind the new wall when it is built and add a bottle of his own for future generations.

"When we re-sheet this wall we're going to place the old bottle that we found from 1974 with that piece of history, and we're going to add our own," he said.

"Little face mask from 2021 and a bit of a description of how life's been for the last couple of years."

Previous : Man claims GP refused appointment and asked him to go to A&E for prescription
Next : Nelson Mandela’s famous shirts, belongings up for auction