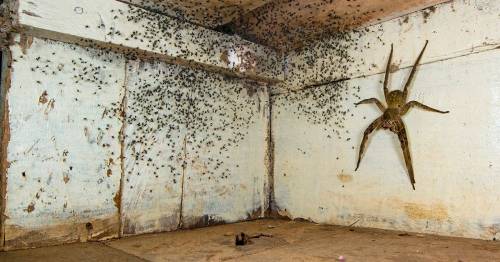 A photographer had little idea he was playing host to a family of venomous spiders before noticing some tiny spiders in his bedroom and looking under his bed – only to find the mother.

Gil Wizen was staying at a reserve in Napo province of eastern Ecuador, when he followed a trail of baby spiders in his bedroom to find a Brazilian wandering spider and its offspring.

The spider, which is as big as a human hand, had taken refuge under Mr Wilzen’s bed where she was seemingly guarding her children, the Daily Star reported.

Mr Wizen managed to take a photograph to document his face to face encounter with the venomous creature, capturing an image which has now won him a prestigious award.

The spider room, which is the name given to the image, saw Mr Wilzen awarded the Wildlife Photographer of the Year award for Urban Wildlife.

According to notes on the award website, Mr Wilzen used forced perspective to make it "appear even larger".

Following the success in capturing the moment, a daring Mr Wilzen safely relocated the spider outside.

Speaking on his blog about the photograph, in a post which appears to be from 2014, he said: "Not only there were literally thousands of spiderlings under the bed, right beside them rested one of the biggest 'non-tarantula' spiders I have ever seen.

“Its body length was 45mm but with its leg span it could easily cover my hand."

Brazilian wandering spiders are more commonly known to roam forest floors at night rather than bedrooms.

They search for prey such as frogs and cockroaches.

Although their toxic venom can be deadly to mammals including humans, it can also be used for medicinal uses.

The overall winner for this year’s Wildlife Photographer of the Year went to French biologist and underwater photographer Laurent Ballesta.

She managed to capture a camouflage grouper fish swimming around in a cloud of eggs and sperm.

Other winning photos included fighting fish, an inquisitive underwater elephant, a calm gorilla and a beautiful reflection in a coral reef.