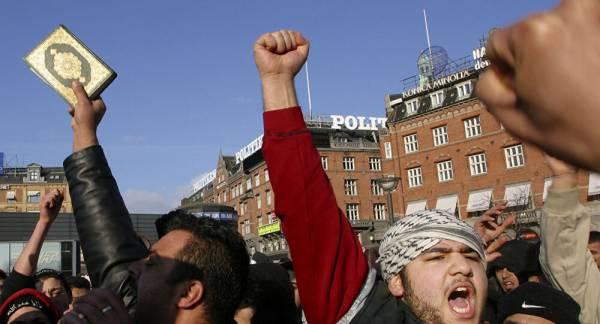 The over 800-page thick report by the Danish Justice Ministry concluded that the people of Denmark generally give a high priority to freedom of speech, with one group in particular lagging behind. In response, Immigration Minister Mattias Tesfaye urged immigrants who don’t respect Danish values to leave the country.

As many as 76 percent of immigrants and descendants from Muslim countries, including Turkey, Lebanon, Pakistan and Somalia, think it should be illegal to criticize Islam, the study “Freedom of Speech in Denmark” from the Danish Ministry of Justice has found.

The over 800-page thick report was commissioned by former Justice Minister Søren Pape Poulsen in 2017 and took three years to compile.

For the sake of comparison, merely 18 percent of the Danish population aged 16 to 74 hold the same opinion.

Rune Stubager, a professor of political science at the University of Aarhus and a member of the Freedom of Expression Commission, argued that there is basis for improving the understanding of freedom of expression in particular groups.

Interestingly, immigrants from Sri Lanka and Vietnam turned out to have views that were roughly in line with the general population.

Stubager underscored that some ethnic Danes also believe it should be illegal to criticise Islam, as the share of immigrants alone is below 18 percent.

The results of the survey worried and angered Danish Immigration and Integration Minister Mattias Tesfaye.

According to him, criticism of power is a prerequisite for Denmark being a well-functioning society.

“We can criticize politicians, religion and rulers of all kinds. No one is free from criticism. The countries that don’t have the right are faring poorly,” Mattias Tesfaye added.

In an interview with Berlingske, Tesfaye said that these people “failed to understand what Denmark is about”, adding that he “unfortunately isn’t shocked”. Over the years, it has become increasingly clear that transplanting people from one culture to another is more difficult than one had imagined, he believes.

Tesfaye stressed that Denmark’s mission is to persuade immigrants to leave their previous convictions and embrace the Danish and Western ones.

“We have to win that battle by making sure the influx from these countries is not too great. And by winning especially the new generations for democracy,” Tesfaye said, urging immigrants who don’t respect Danish values to leave Denmark.

The national-conservative Danish People’s Party’s legal spokesman Peter Skaarup was “appalled” by the results, stressing that the problem hasn’t been addressed properly despite decades of warnings. According to him, this reflects decades of failed integration and stresses the importance of repatriation efforts for those who can.

Following the mass immigration of the recent decades, the share of immigrants has risen to over 800,000, or nearly percent 14 percent of the Danish population. In recent years, it has increasingly raised questions about integration, participation in the labour market, and cultural differences. A plethora of measures to combat the spread of ethnic ghettos from the country’s official ‘Ghetto List’ have been presented.

Previous : Pence Says He Should Have Worn Mask While Visiting Mayo Clinic
Next : Coronavirus Pandemic Shows China is Greatest Geopolitical Threat to US – Senator Ted Cruz