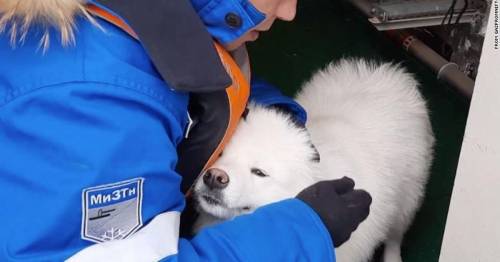 A dog who had been wandering around in the Arctic from more than a week has been rescued by a crew of a Russian ship.

Sailors spotted the pup deep in the ice fields near the village of Mys Kamenny in northern Russia, state channel Russia 1 reported.

Captain of the Alexander Sannikov icebreaker ship, Yegor Agapov, told the network the dog approached the side of the vessel on the freezing landscape toward an oil terminal in the Gulf of Ob.

Video footage showed the little white dog, named Aika, wagging her tail and walking carefully on the ice before the crew lowered a ladder for her to climb up.

Navigation assistant Evgeny Nagibin said: "We put out the ladder, by which the dog climbed aboard on its own.

"Later, with the help of mobile phone, we established contact with the local population, found the owner of the dog."

They took the dog to the nearby village and located the owners, who said Aika had run away during a walk around the village.

The dog was unlikely to have survived if he wasn't spotted by the ship's crew.

Aika's grateful owner Svetlana Chereshneva said: "The dog didn't go anywhere without us, we have no idea how she got there."

Aika is a Samoyed, a herding dog with a thick, fluffy white coat, is a native breed to northern Russia and Siberia.

Previous : Desperate search for girl, 12, who vanished in her school uniform
Next : Jake Paul’s cringe speech before brother Logan’s fight with Floyd Mayweather