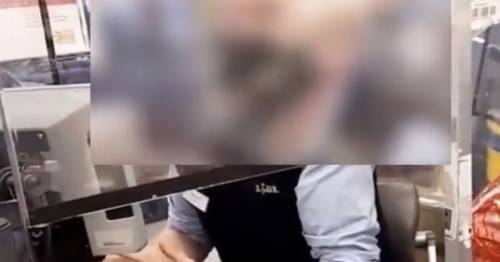 A video has emerged of a Lidl store manager keeping his cool while refusing to serve a pair of customers without masks on who "verbally abused" him.

The two customers did not make staff aware of any valid medical reasons for shopping maskless at the cut-price supermarket in Cork, Ireland.

In a clip of the row, filmed by one of the customers involved, the manager is accused of "breaking the law", Cork Beo reports.

The manager, who is sitting behind the till, says "I'm not" and removes the customer's items – a multi-pack of crisps and a bunch of flowers – from the conveyor belt.

He's then challenged on why he asked for " private medical information "

The customer claims the manager is "discriminating" against him

The pair did not make staff aware of any medical conditions, reports say

"All I'm saying to you is that your invitation to shop here has been removed," said the manager, adding that it was "because of the way (they) spoke" to him.

He then reveals his name and states he is the Store Manager, while the duo repeatedly check with one another that the scenario is being filmed.

"Thanks very much, have a nice evening," the manager says coolly.

The customer then states that "this is discrimination" to which he's once again told his invitation to shop has been removed.

"So we're being removed from the shop?"

Similar incidents have been recorded across Ireland over the past week as the festive season begins alongside a sharp increase in Covid cases.

A video emerged of a maskless man hurling homophobic abuse at the staff of a cafe in Dublin earlier this week.

After his tirade, he left, but only to return a short while after to further verbally abuse staff before allegedly assaulting one worker outside the coffee house.

Staff were "terrified" he would return with a weapon.

Lidl issued a statement in relation to the Cork incident, which read: "There was an incident in our Charleville store where a customer was verbally abusive towards our store team.

"The Store Manager refused to serve the customer and asked them to leave the store.

"Lidl will not tolerate any abuse of our hard working frontline teams who have diligently served their local communities since the onset of the Covid-19 pandemic.

"Lidl requires face masks to be worn, as per government guidelines, when shopping in our stores. Lidl’s signage clearly requests that any customers who have medical conditions, which would render them exempt from the legal requirements, should proactively approach a member of management to inform them of this.

"On this occasion the customer did not make the team aware and subsequently became abusive."

Previous : What experts predict the pediatric COVID-19 vaccine will do for national vaccination rates
Next : Lukashenko tells migrants at Belarus-Poland border he won’t make them go home