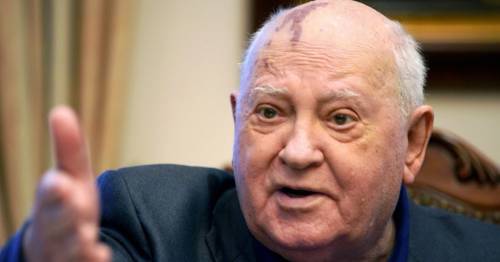 The former president of the USSR is on dialysis, said Mash media outlet.

The 91-year-old who presided over the opening up of the Soviet Union in the late 1980s has suffered repeated health problems which are “worsening”, it added.

Gorbachev introduced reform and openness of the communist system known as terms "perestroika" and "glasnost".

The Soviet Union was dissolved in 1991.

News of his illness comes as critics accuse Vladimir Putin of aiming to start rebuilding the USSR by invading Ukraine.

Gorbachev Foundation spokesman Vladimir Polyakov told Life News that Gorbachev had been undergoing treatment for several years due to kidney problems, including dialysis.

Gorbachev oversaw the opening up of the Soviet Union
(

He did not comment on the seriousness of the statesman’s current condition.

Separately, it was announced that Gennady Burbulis, the senior Russian official who confirmed the dissolution of the Soviet Union in December 1991, died suddenly on Sunday at the age of 76 in Azerbaijan.

Two other leaders who signed the death certificate of the USSR, Ukraine’s Leonid Kravchuk and then Belarus leader Stanislav Shushkevich, both died last month aged 88 and 87 respectively.

The other participant – first Russian president Boris Yeltsin – died in 2007.

Last week, it emerged an old Soviet nuclear missile base in Belarus is thought to be being prepared to host Putin's latest arsenal of deadly atomic weapons.

An “inspection” of the abandoned 369th missile regiment facility took place on Sunday, June 14, it has been claimed.

In Soviet times, missiles that could cause “dozens of Hiroshimas” were based there.

This might be the case again in coming times, though this would be even more devastating if Putin’s hypersonic nuclear missiles like Sarmat – Satan-2 – and Tsirkon (Zircon) are deployed.

A referendum in Belarus in February permitted the country to host nuclear weapons once more, and permanently act as a base for Russian troops.

Participants wearing historical uniforms take part in a military parade marking the anniversary of the Soviet defeat of Nazi Germany, in Vladivostok on May 9, 2022
(

The old nuclear weapons base, Zhitkovichi, is near Cheretyanka village, in the Gomel region of Belarus which borders Ukraine.

Belarus in 1996 gave up its inherited nuclear arsenal which was returned to Moscow.

The revelation of a recent “inspection” at the base came from Belaruski Hajun Telegram channel, which monitors military activity.

An Mi-8 helicopter of the Belarusian Armed Forces took off from an air base in Machyulishchi to former military unit 41738 near the village of Volma (Minsk region) where so-called 'Platform 400.

Dome' is located, the command centre of Russia's Armed Forces in Belarus,” said the channel.