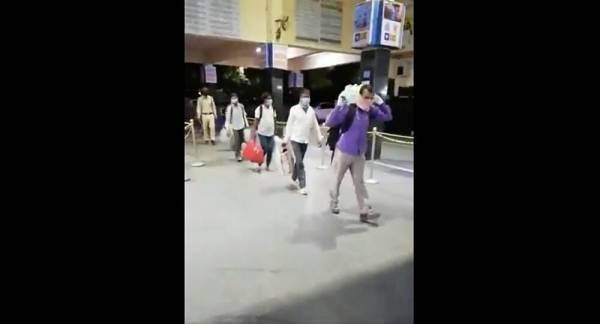 New Delhi (Sputnik): India is currently under its second phase of nationwide lockdown, which was imposed by Prime Minister Narendra Modi and was later extended until 3 May. The lockdown has brought the country to a standstill, with borders shut and only essential services allowed to function.

Thousands of migrant workers and students have been left stranded in states far from their homes after the nationwide lockdown was imposed on March 25.

Offering a surprise gift to the stranded thousands of migrant workers in different parts of the country, the government started ferrying people by train, carrying 1,200 labourers from Telangana to Jharkhand early Friday morning.

All the passengers were screened before boarding the train and the necessary precautions were taken, a senior railway official said. “We have made sure that social distancing is maintained while all the people have been given sanitiser, gloves and masks. We have also arranged for their food and water. Security personnel are also there on the train to make sure that rules are followed”.

​Once the workers reach back home, they will be quarantined and a check-up will be conducted, the official added, saying: “As per the instructions of the government, we are handing over place to safely evacuate the stranded labourers in each state. Soon several million labourers will be sent back to their native places”.

The special gift of helping out stranded migrant labourers in different parts of the country incidentally came on 1 May, which is celebrated as  “Labour Day” to mark the achievements of workers across the globe.

The decision to ferry the passengers came two days after the government passed orders to permit migrant labourers, students, and others to return home in a planned manner. Several states have started to prepare a list of stranded labourers to be sent by the special trains.

Several members of the twitterati slammed the government for coming to help after almost five weeks.

​During the lockdown, migrant labourers were left without work, food, money and even shelter. With all the transportation shut, many of them even started walking hundreds of miles to reach back home. Initially, several incidents of migrant workers being stuck at state borders also came to light.

Following heavy criticism, all state governments were directed to give shelter and food to migrant labourers while maintaining social distancing and the transmission of the virus in mind.

According to the Indian Health Ministry, the country has recorded more than 35,000 positive COVID-19 cases, while 1,147 people have died due to the infectious virus so far.

Previous : Organisers committed to completing Champions Cup despite French ban
Next : Australian PM Admits Canberra Has ‘Nothing’ to Prove Chinese Lab Was ‘Likely Source’ of COVID-19