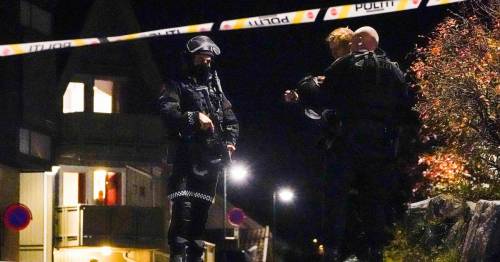 A traumatised witness has described the chilling moment she locked eyes on a man who killed five people in a bow and arrow attack in Norway.

The woman, named only as Hansine, said she narrowly missed being caught up in the attack at a supermarket and fears she might have been killed had she not stopped for a cigarette.

Panic set in when she saw someone run past her terrace and then spied a man standing on a street corner with a quiver over his shoulder and a bow in his hand, she told TV2.

Hansine said the armed man soon disappeared and she saw people running for their lives, including a woman cradling a child in her arms, as tales of terror emerged following the deadly attack in Kongsberg.

Terrorism was being investigated as a possible motive.

Have you been affected by the attack? Email webnews@mirror.co.uk.

Heavily-armed police stand at the scene of the rampage
(

Other witnesses have described seeing victims' bodies on the floor and hearing screams for help.

Ida Skinness was on her way out when her flatmate shouted at her to stay inside.

Ida told TV2: "Then I heard howls and screams outside, and saw people running and then a lot of blue lights."

Hansine said a person, possibly a police officer responding to the rampage, ordered her to shelter inside her home after she saw the attacker in the street.

She soon turned on her TV and realised the horror that was happening nearby.

Hansine said she had planned to go to the Coop supermarket, where the attack occurred, after finishing her cigarette.

She added: "I'm very grateful that I took that smoke, otherwise I could have ended up in the middle of it on the way to the store.

"The smoke saved me."

Five people were killed and two others, including an off-duty police officer who was a customer inside the shop, were seriously injured on Wednesday evening.

An arrow is seen in a wall after an attack in Kongsberg, Norway
(

The suspect, a 38-year-old Danish man who lives in Kongsberg, was arrested after he fled the scene and officers fired warning shots, said police.

He is thought to have been the only attacker and remained in custody on Thursday morning, but had not yet been questioned.

"The man used a bow and arrow … for some of the attacks," police chief Oeyvind Aas told reporters.

The police were investigating whether other weapons had also been used, he said.

The death toll was the worst of any attack in Norway since 2011, when far-right extremist Anders Behring Breivik killed 77 people, most of them teenagers at a youth camp

The attacks on Wednesday took place over "a large area" of Kongsberg, a municipality of about 28,000 people in southeastern Norway, about 40 miles from the capital, Oslo.

Following the attacks, the police directorate said it had ordered officers nationwide to carry firearms. Norwegian police are normally unarmed but officers have access to guns and rifles when needed.

"This is an extra precaution. The police have no indication so far that there is a change in the national threat level," the directorate said in a statement.