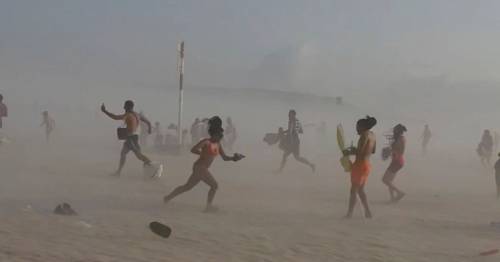 A kitesurfer has been killed after a "mini tornado" threw him against a coastal restaurant window.

The freak weather pattern caused chaos along the Côte Fleurie, between Ouistreham and Deauville.

The 31-year-old kitesurfer died in the commune of Villers-sur-Mer, near Deauville.

Thierry Granturcom, the Mayor of Villers-sur-Mer, said: "It blew more and more violently and it ended with a mini tornado.

"We had communication with Météo France which informed us that they had not been able to anticipate this kind of mini tornado.

"We knew that we were going to have strong winds, they were announced at the very end of the evening, even in at night, but we didn't think they would be so violent and at 8:30 p.m."

Locals were enjoying the unseasonably warm weather when the "mini tornado" struck the beach.

However, the European heatwave has now come to an abrupt end, with temperatures in the UK set to drop today before more thunder rolls in.

Locals were enjoying the warm weather when the strong winds struck
(

People across the country had been enjoying scorching temperatures over the weekend and they peaked at 32.7°C on Friday.

The UK Health Security Agency issued a level two alert for southern and central England, warning people the heat could affect their health.

But parts of the country were hit by thundery showers last night and more rain is forecast for this evening.

People in parts of the south were late last night told to stay indoors if possible to avoid a “huge cluster” of thunderstorms.

The Met Office said most of the country can expect dry but cloudy conditions, with some sunny spells for most of the day and temperatures of just over 20°C.

But heavy rain is then expected to sweep across southern England this evening.

“There’s always a risk of seeing some showery rain across the southern coasts of England. Showers across Northern Ireland and Scotland will ease throughout the day and elsewhere it will be mostly dry, with plenty of sunny spells around.

“In that, temperatures will be getting up to the low 20s and it will feel quite pleasant.

“That will continue as we head through into the evening, when we will see more in the way of sunny spells.

"But we will see further showery rain start to push its way into southern and south western England on Sunday night, bringing the risk of the odd rumble of thunder."