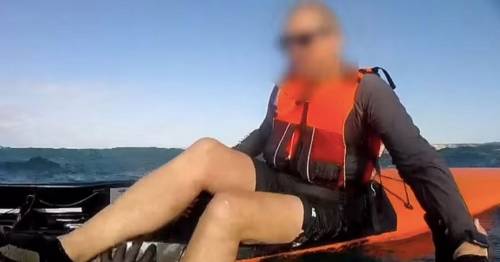 A distress call on an Apple watch meant that a kayaker who had been swept 4km out to sea could be rescued by helicopter.

The man had originally gone out with another kayaker on Sydney 's north shore – but they became separated.

Strong currents and winds yesterday (Saturday, June 18) morning swept one of them out to sea, forcing him to use his Apple watch to make an emergency service call shortly after 9am.

A search was then launched, with New South Wales (NSW) Police Marine Area Command seeking assistance from the rescue helicopter and surf lifesaving.

Rescuers spotted the bright orange kayak 4km out to sea
(

The orange kayak was spotted nearly 4km offshore by the rescue helicopter, with the kayaker struggling to stay upright at this point due to his fatigue.

Helicopter rescuer Nick Pavlakis told 9 News, according to the Daily Mail : "He was falling out of his kayak and had taken on quite a bit of water.

"He was lucky he had connection on his device to make that desperate call for help."

Just before 9.30am the kayaker was winched aboard the helicopter, with the kayak returned to shore by the lifeguards.

The helicopter landed in a sports oval in Balmoral, but the man declined treatment from the paramedics as he said he wasn't injured.

The search for the second kayaker was called off when officers were able to get hold of him on the phone, being told he had returned to shore.

The kayaker was rescued by helicopter
(

The Bureau of Meteorology issued a hazardous surf warning yesterday which covered the Sydney coast after swells reached 7m the night before.

Another warning was issued this morning (Sunday, June 19) for Coffs Harbour and Byron Bay coasts, with swimmers, rock fishers and boaties urged to be careful.

Previous : Prince William’s ‘secret meeting’ with Kate Middleton when they were just nine
Next : Jake Paul responds to Mike Tyson offer and agrees to $300million fight