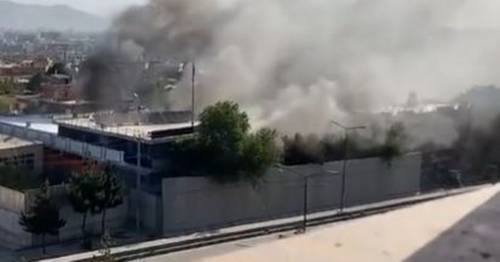 Multiple explosions have been heard along with gunfire at a Sikh temple in the Afghanistan capital Kabul, with many feared dead in what is being reported as a possible terror attack by ISIS.

Four consecutive blasts have been reported coming from the Gurdwara Karte Parwan, a Sikh place of worship, in Kabul, and shooting is ongoing on Saturday morning.

Armed attackers are believed to have entered the building and a siege is taking place, reported tribuneindia.com.

There are reports that there could be up to 15 hostages being held on the second floor of the temple.

Eye witness accounts have claimed that there are many dead and people are being taken to hospital.

The front door of the building is on fire and Taliban forces are preparing to attack the gunman inside who are thought to be from ISIS, it is reported.

Manjinder Singh Sirsa, of India's BJP political party, reportedly spoke to the Gurdwara Karte Parwan President Gurnam Singh, who confirmed that the attack started at 6am local time when the first prayers of the day were underway.

Mr Singh Sirsa posted a video on Twitter showing large plumes of black smoke and the sounds of gunfire.

He wrote: "Video of terrorist attack on Karte Parwan Gurdwara Sahib in Kabul at 6am today. At present the Gurudwara is in the possession of terrorists. This is the main gurdwara of minority Sikhs in Afghanistan."

In a follow up tweet he said: Sikh Sangat (approx 10-15 in number) stuck in Gurdwara Karte Parwan in Kabul which was attacked by terrorists today morning. One person has been reported dead in this attack."

Previous : Tens of thousands to protest demanding government does more in cost-of-living crisis
Next : Daughter of Brit jailed in Iran says Father’s Day is ‘the hardest day of all’ – World News