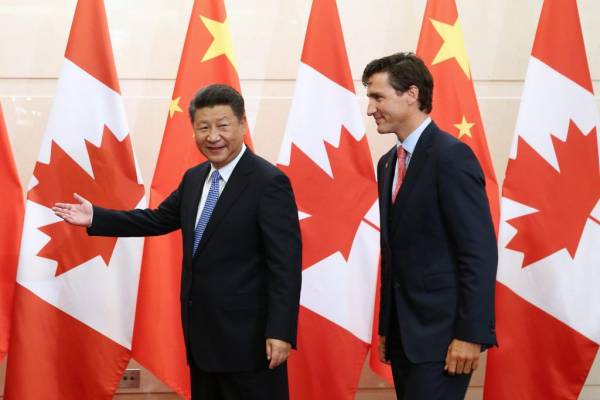 The spring of 2020 will be remembered as a particularly cruel period in Canada’s short history. Our currency has been wounded by ever-more audacious “stimulus packages,” our unemployment has skyrocketed, and our long-term care homes have degenerated into colonies for the afflicted. Gloominess has become the national pastime as we endure the misery of a government-mandated lockdown and whatever hidden consequences it may produce.

In the early days of the pandemic, it took some courage to say that this virus would transform our society—nowadays, such sentiments are scribbled into every available column at every possible opportunity. One of the more notable changes has been the Canadian public’s growing resentment towards the Chinese regime. To them, this pandemic is the crux of Beijing’s hegemonic ambitions. Yet to our Liberal government, this outrage is nothing more than dangerous, reactionary ignorance.

Trudeau’s government was prepared to deal with popular anger; they have done so before in the aftermath of their near countless scandals. What they were unprepared for, however, is the post-virus consensus forming globally against the Chinese regime.

It is one thing for President Trump to attack China (this merely confirms the Liberal’s prejudices), but now Australia, France, and Britain have all condemned the People’s Republic for covering up the threat of the coronavirus. Perhaps this resentment, so sneered at here in Ottawa, is more lucid than was initially assumed.

In recent years, there have been numerous reports of Beijing’s tyrannical abuse of its own citizens and economic ruthlessness abroad. Yet Justin Trudeau still lacks the guts to even broach the subject, ostensibly undermining the foreign policy of our closest allies.

Take, for instance, the recent remarkable comments from Trudeau’s health minister. When asked whether she would denounce China’s forgery of coronavirus data, she responded by saying that “there’s no indication the data that came out of China was falsified in any way.” Her statement showed a brazen disregard for the entirety of U.S. intelligence findings.

Digging the hole deeper still, the Liberal minister accused the journalist of “feeding into conspiracy theories,” which caused even American news outlets to raise an eyebrow. Ottawa’s position was clear: they favored Beijing over Washington.

If this were an isolated incident, then perhaps all this might have been forgiven. Yet Trudeau’s unnervingly affectionate relationship with the CCP existed well before the pandemic. A prime example was his ambassadorial appointments to Beijing. One of his choices took almost unbridled pleasure in appearing on Chinese state television to denounce President Trump.

Despite this, the controversy generated from the first appointment paled in comparison to that of the second. Dominic Barton, the newly tapped ambassador, turned out to have had personally profited from dealings with the CCP. Moreover, he had chosen to enjoy a Communist Party retreat in Xinjiang province, held only four miles away from a Uyghur “re-education” camp. I’m sure you can imagine the snickering that followed that landmine.

I suspect that if these appointments had been made in any other country, they would have created a national uproar. Under a Trudeau government, however, it was entirely predictable. After all, why should these scandals surprise us when Trudeau was recorded saying he had “a level of admiration…for China. Their basic dictatorship is actually allowing them to turn their economy around on a dime”?

What Trudeau presumably doesn’t admire about that “basic dictatorship” is that it has undermined the very institutions he was supposedly elected to protect. As the RCMP has recently made clear, China has infiltrated our universities, media, and legislatures. Naturally, Trudeau failed to comment on that bombshell report.

If the Chinese regime’s sheer contempt for Canada’s democratic institutions were to be summarized in one incident, it would surely be the Meng Wanzhou episode—a Huawei executive who was arrested in Vancouver for violating U.S. sanctions. As soon as this occurred, two Canadian businessmen were immediately detained without charge. Consider for a moment that symbolism: the lives of two Canadians for one Chinese princeling.

Those two men have now spent over 500 days in some Chinese prison, away from their young families and friends. But never mind all that. What’s the significance of two lives, really, in the face of a lucrative trade deal?

China, of course, has attempted to remedy this anger through what has become known as “mask diplomacy,” where they send medical equipment to nations as a means of improving their tattered reputation. This might have been more successful had the equipment not been contaminated and decrepit.

Whether our government encourages it or not, our relationship with China has now been irreversibly transformed.

Trudeau’s inanition on the Chinese issue has been deeply embarrassing for Canadian conservatives, yet there is some cause for optimism. The two leading candidates for the Conservative Party’s leadership now use Trudeau’s handling of the China issue as a means to sell memberships. If the Tories win the next election, Canada will inevitably fall in line with the rest of the free world.

Our prime minister has always been obsessed with standing on the right side of history. This has led his government to make inconsequential decisions on frivolous issues: creating a gender-balanced cabinet, legalizing marijuana. Yet when it comes to Canada’s greatest test in a generation, he has evaded all action, placing political convenience over his moral duty.

Nico Johnson is a political correspondent at The Post Millennial. Originally from the U.K., Nico now lives and works in Montreal, Quebec.

Previous : Michael Jordan showed me what it meant to be a star, says BJ Armstrong
Next : All is Not What it Seems in Sweden