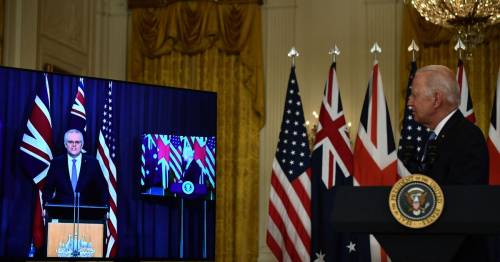 Joe Biden appeared to forget the name of the Australian prime minister during a landmark security speech – instead calling him "that fellow Down Under".

The US president, UK prime minister Boris Johnson and Scott Morrison, the Australian premier, all announced on Wednesday that their nations would share defence and nuclear submarine secrets.

Each gave a short speech about the initiative, which focuses on helping the Australian navy and comes amid growing concerns over China.

But, during the handover from Mr Johnson, Mr Biden appeared to make a blunder and did not say Mr Morrison's name when thanking him.

Instead, he said: "Thank you Boris", before pausing – then adding: "And I want to thank that fellow Down Under. Thank you very much, pal. Appreciate it Mr Prime Minister."

Do you have a view on this story? Email webnews@mirror.co.uk.

Mr Biden is known to be prone to a verbal slip-up – with reports claiming he is even well-aware of his reputation as a "gaffe machine", and thinks it may endear him to voters.

Announcing the new defence partnership, Mr Johnson said the alliance, known by its acronym AUKUS, would make the world safer and generate jobs across the UK.

He said: "I'm delighted to join President Biden and Prime Minister Morrison to announce that the United Kingdom, Australia and the United States are creating a new trilateral defence partnership, known as Aukus, with the aim of working hand-in-glove to preserve security and stability in the Indo-Pacific.

"We are opening a new chapter in our friendship and the first task of this partnership will be to help Australia acquire a fleet of nuclear-powered submarines, emphasising of course that the submarines in question will be powered by nuclear reactors, not armed with nuclear weapons, and our work will be fully in line with our non-proliferation obligations."

The new trilateral defence partnership will be known as Aukus
(

Mr Johnson added: "Perhaps most significantly, the UK, Australia and the US will be joined even more closely together, reflecting the measure of trust between us, the depth of our friendship, and the enduring strength of our shared values of freedom and democracy.

"Now the UK will embark on this project alongside our allies, making the world safer and generating jobs across the United Kingdom."

Sign up for our daily newsletter to keep up to date with all the essential information and changes at www.mirror.co.uk/email .

Previous : ‘The Bodyguard’ movie gets a Hollywood remake
Next : Man hails ‘unbelievable’ third lottery win with ticket from same store