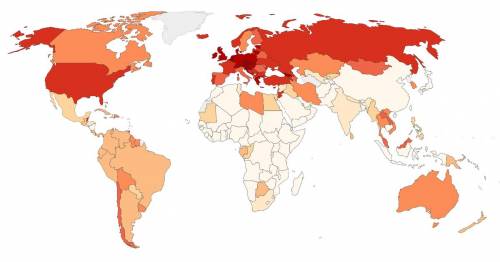 An interactive map shows where Covid hotspots have emerged across Europe – as countries bring in tighter and tighter restrictions to combat rocketing case rates.

Swathes of central and Eastern Europe have some of the worst rates in the world and the continent is quickly emerging as a global hotspot.

As the UK and much of Europe looks ahead towards what could be a difficult winter for healthcare systems, many European countries are already being forced to bring in restrictions.

These include targeted restrictions on the unvaccinated and lockdowns.

The UK seems to have relatively low Covid rates compared to some of its European neighbours with a seven day average of 604.54 new cases.

A number of countries have seen violent protests against restrictions and lockdowns in recent days, with Austria, Switzerland, Italy, Denmark and Croatia all seeing unrest after bringing in new restrictions.

Slovakia currently has the world's highest seven-day average rate of Covid cases per million people, with 1,810 people catching the virus – nearly triple the rate of the United Kingdom.

To deal with spiralling case rates, the country has introduced tight restrictions on the unvaccinated, meaning they will not be able to enter restaurants, shopping centres or shops, sports activities and public events.

The country has resisted a full lockdown so far during Europe’s fourth wave.

Anti-lockdown protesters in the Netherlands after new restrictions were introduced

Slovenia and Austria follow behind with 1,550 Covid cases per million people each.

Both countries have some of the lowest vaccination rates in Europe, and Austria has seen cases rising unabated since September.

The country entered its fourth national lockdown yesterday and became the first European nation to make the vaccine mandatory, with the law coming into force from next February.

Not only do both countries have rates one and a half times higher than the UK, but the dramatic increases recently in cases contrasts to the UK’s which since the summer has been rising and falling around its current mark of 600 cases per million.

The Czech Republic is another hotspot, with rates having risen sharply since mid-October.

The country now records a seven day average of 1,400 Covid cases per million people, one of the highest globally and mirrors the worrying picture of its Eastern European neighbours.

Similar to Austria, it has introduced restrictions on the unvaccinated parts of its population, with rules preventing them attending public events, restaurants, pubs and other services.

Netherlands and Belgium have 1,230 and 1,190 Covid cases per million respectively, and recently saw violent protests in response to new restrictions the governments introduced.

35,000 people marched in Brussels in what started as a peaceful protest but descended into violence.

Signs among the crowd ranged from far-right insignia to LGBTQ+ rainbow flags.

Liechtenstein, Croatia, Georgia and Ireland are the next four countries with the worst covid rates globally, three of which are located inside the Eastern European hotspot.

Whilst Liechtenstein’s rates seem to only be on the up, Croatia and Georgia have experienced a decline in cases recently.

Ireland’s rate of 874.88 cases is significantly higher than that of the United Kingdom’s.

Germany currently has a lower case rate than the United Kingdom, but the direction of travel isn’t positive as cases seem to be trending upwards.

Angela Merkel, similar to her counterparts across Europe, announced tighter restrictions for the unvaccinated in Germany.

The restrictions limit access to restaurants, pubs, sporting events and cultural venues for the unvaccinated if the state breaches a threshold of six hospitalisations per 100,000 people.

The UK comparatively has brought no restrictions in, but cases in the UK have oscillated up and down since the summer and despite currently being on the rise there is no sign of restrictions being introduce.

Another significant difference is that Germany's Standing Committee on Vaccination only recommended booster jabs for everyone over 18 last Thursday.

Previous : After a century and a half, Ethiopian artefacts return home
Next : Dutch PM lashes out at ‘idiots’ after third night of violence