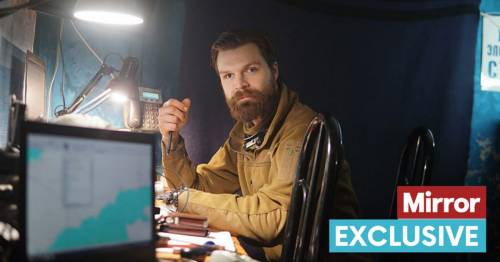 A Ukraine army chief holed up in the besieged Mariupol steel plant gave the Mirror a harrowing account of conditions inside.

Ilya Samoilenko describes the terror of being bombed for 73 days by the Russians while desperately trying to hold the Azovstal plant.

Samoilenko, 36, is in charge of the Ukraine army intelligence and reconnaissance in the factory.

The courageous officer had already lost an eye and arm while dealing with Russian mines earlier in the war.

He talks about the heroism of the doctors and the bravery of the soldiers.

24 hours before his call to the Mirror three of his colleagues had been killed and six wounded.

He said: “We’ve been in a locked-down place for 73 days now – without replenishing our supplies.

“You go brush your teeth in the morning and you know you might get killed doing that.

“It’s like an extreme sport or some twisted game where you play the role of the target.

“One of our soldiers was killed – his mother received messages from his phone with photos of her son, executed by the Russian military – strangled with a bag on his head.

“The Russians are not interested in witnesses surviving at all. The Azovstal factory area is completely bombed out.

“There are huge bomb craters, some of them up to 20 metres in diameter. It resembles the surface of the moon.”

We asked him to describe a typical day in Azovstal.

He said: “Each day bombs are dropped, shots are fired at us. Conditions are very far from ideal.

“We are not just living here in a blockaded area, we are fighting here.

“An ordinary day depends on what a soldier or an officer does, there are different duties.

“But directly each of us, apart from providing for our daily life, is fighting.

“Many critical medications are no longer available.

“It is a problem we cannot solve on our own. There are many different types of wounds.

“These are people who have been rescued from the rubble.

“Amputated limbs, arms, legs – not problems that can be easily solved in conditions of an improvised field hospital.

“Most of the amputations that fighters have received are when a limb has been damaged or torn off already by an explosion, or by a shrapnel or a bullet.

“Here in Azovstal the doctors were doing the most unbelievable things, heroic deeds. The medics are real heroes.

“People are asking us how much food and water we have left. I can’t believe my ears when I hear that.

“Would I say that if I knew the exact number? What is that, people are setting a counter until we die?

“At the moment we have managed to find all the civilians, they have been evacuated.

“But there is still a possibility that some could be under the rubble. But 99% of the people we found have left.”

He added: “The problem is that the Russian side, contrary to UN agreements, continued shelling while evacuating people.

“The Russian army can be expected to do anything.

“Because by their actions they have already shown that their military is capable of any action beyond human understanding.

“This is a terrorist tactic, a scorched earth tactic.

“We had an incident recently – one of our fighters “Dan” was surrounded in the city. He was captured.

“The enemy published the video, where you could see this soldier with his name tag, his surname, his unit.

“After about four days his mother received messages from his phone with photos of her son, executed by the Russian military, strangled, with a bag on his head.”

He said they would never surrender.

“Prisoners of war who surrender in large numbers are a huge gift to the enemy.

“A gift that is both ideological and psychological,.. We can not give such a gift to the enemy.”

The steelworks in Mariupol became one of the key battlegrounds in the war with crack Ukrainian troops fighting to save it from falling into Russian hands.

It became such a controversial flashpoint that Vladimir Putin was furious his army could not take it.

Last month he described a plan to storm the Azovstal steelworks as “impractical”.

He then ordered Russian troops to blockade the area “so that a fly can’t get through” to try and starve the Ukrainians.

But after several weeks he appeared to change tack and heavy bombing intensified again.

Emergency personnel work near a building damaged after a military strike in Odesa, Ukraine
(

The Azov Regiment, which is holding out in Azovstal, said that in the past 24 hours, 34 Russian aircraft had flown over the plant including eight sorties by strategic bombers.

It said the plant had come under fire from the Russian navy and from tanks, artillery fire and rockets.

Hundreds of civilians took shelter in the plant which has a huge myriad of underground tunnels.

Most of them have been safely evacuated in the last seven days.

Around 2,000 Ukraine soldiers are still in the huge plant.

Russia has taken the whole city of Mariupol except for the steelworks.