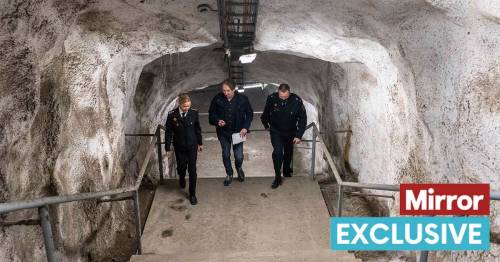 Most don’t even notice the shabby metal hut, its cracked glass windows scrawled with graffiti, as they pass by the quiet cobbled square at the end of Franzeninkatu St, in a leafy district of east Helsinki.

And even fewer would imagine the vast world that lies behind its rusted doors.

We are led down four steep flights of concrete steps, covered by what seems like decades of dust, until, 25 metres below the surface, a long, sloping tunnel dug into solid rock stretches into the distance.

Further on, and even deeper underground, two sold steel doors, the first a metre thick and so heavy it takes two people to push it open, before it seals us off from the outside world with a thunderous bang.

Most Western countries have only just begun to contemplate the possibility of being targeted by Russian aggression following Putin’s shock invasion of Ukraine. But Finland has been preparing for decades.

And in its capital – where a quarter of the country’s 5.5million people live in its metropolitan area – they have taken no chances with their powerful eastern neighbour, suspicious even in the years when relations seemed friendly.

The result is a remarkable feat of engineering and foresight – a sprawling network of nearly 500 underground bunkers dug deep into the hard granite bedrock, stretching for almost 200 miles and covering around 10million square metres.

The bunkers have enough space – and beds – to shelter every single one of the Helsinki’s 630,000 residents, and thousands more for anyone visiting or working in the city, and are designed to withstand even a nuclear attack.

“This door can take a blast of up to six bars of pressure, so even a nuclear bomb won’t break it,” says our guide, ‘preparedness instructor’ Varautumisen Opettaja. “The second door is gas and chemical proof. So there could be bombs dropping above and yet children happily playing down here below.”

It means that, if Europe’s worst fears materialise and Moscow’s war in Ukraine spills across the continent to other countries on its eastern border, Finland’s most important city will be able to protect its citizens like no other.

And today Finland announced plans to join NATO “without delay”.

In a joint statement, Finnish President Sauli Niinisto and Prime Minister Sanna Marin said: “Finland must apply for NATO membership without delay. We hope that the national steps still needed to make this decision will be taken rapidly within the next few days.”

A formal application is expected within days and NATO leaders are expected to discuss the bid at their summit in Madrid next month.

It follows Boris Johnson 's visit to the country yesterday when he pledged Britain would come to the defence of Sweden and Finland if they were attacked by Russia.

Just days earlier the Mirror was given exclusive access to Helsinki’s secret underground world, through one of the barely-noticeable access points on street level to where, in the event of a Russian assault, the public would be told to make their way.

Despite quietly continuing to carve out the shelters since the 1960s, the minds of Finnish defence chiefs have become more sharply focussed since the invasion of Ukraine.

The war, and Russia’s threats that Nato membership would guarantee the “destruction” of the Finland and Sweden, have revived memories of the Winter War of 1939-40, when the Soviet Union declared war on Finland by unexpectedly dropping bombs on the capital.

Though vastly outnumbered and outgunned, the Finns managed to hold the Russian onslaught, but thousands died and Finland had to give up 12% of its area in a peace settlement.

In the huge caverns that lie past the impenetrable steel blast doors deep underneath Helsinki, the country’s determination to never let that happen again is clear.

What we find as we walk further into Helsinki’s secret underground city makes me wonder if the neglected state of the metal hut on the street above is all part of the clever master plan.

The carved walls of the rooms and halls, linked by a rabbit warren of tunnels, are all immaculate, whitewashed and fitted with an elaborate air filtration systems that can block radioactive particles and other harmful substances.

There are also gas detectors both above and below ground that constantly monitor toxicity levels, underground reservoirs and even a back-up power system that will kick in if the regular electricity supply is cut.

And the bunkers always have enough food and drinking water supplies to house people continuously for up to 14 days.

We stop by a storage room where thousands of emergency beds are piled high, as well as toilets and cubicles that can be set up within hours by volunteer teams who regularly conduct drills.

The underground shelter could accommodate around 6,000 people in an emergency
(

Varautumisen says the city knows just how much heat and waste will be produced depending on the number of people sheltering here, and can adjust their cooling and disposal systems accordingly. “An average person emits 100 watts of heat a day and expels 2kgs of waste, 1/2kg solid and 1.2kgs liquid,” he explains.

“Even if you have the city’s entire population down here, we have made sure no-one will be uncomfortable. All the waste is taken away. There are even ventilation vents above each of the toilets so the bad smell goes too.”

He adds: “It’s all about showing that we can survive. And if anyone attacks us again, we will survive.”

Finland’s history with Russia is long and complicated. In the early 1800s it was absorbed by the Russian Empire, which it remained a part of until the 1917 Russian Revolution, when the Finns declared their independence.

Russia invaded Finland twice during World War Two, after which Helsinki began to dig into the 1,800 million-year-old bedrock on which the city is built, in preparation for the next time.

Since then, nearly nine million cubic metres of rock has been excavated – more than twice the volume of Wembley stadium.

Some of the spaces, like the Torkelli civil defence shelter we were shown around, are entirely closed to the public. Others though have been allowed to be repurposed, as underground car parks, go-karting tracks, ice rinks and even corporate data centres – as long as they are able to be transformed into shelters with 72 hours’ notice.

The shelters could accommodate all of Helsinki citizens in a conflict
(

One of the bunkers, normally a public swimming pool, can be drained to make way for thousands of beds, something that is tested once a year in a training exercise.

The 15,000 sq m Merihaka shelter in central Helsinki houses three large ‘floorball’ courts – a type of hockey popular in Finland during the long winter months. But it too can be quickly made ready to shelter local residents, and in the event of attack is able to house up to 6,000 people.

At the far end of the vast underground cavern is another blue blast door, leading to a ‘control room’, with large oxygen systems, electricity generators and more piles of beds, toilets and supplies.

Smaller tunnels lead off to other spaces used only by the military, including one passageway which connects to an island used exclusively by the regiment responsible for defending Helsinki.

Jani Pitkanen, commander of the Helsinki Rescue Department, says the bunkers are also connected to outside stores, meaning they can shelter the entire city for “several months”.

As well as 60 large bedrock shelters, under Finnish planning laws new buildings measuring over 1,200 sq m must provide a shelter, bringing the number of bunkers in the city to over 5,500.

“Because of our history, civil defence and preparedness are part of our nature,” says Jani. “There are hundreds of volunteers who are trained as shelter staff. All citizens are advised to always have at least three days supplies of food, water and fuel, as well as supplies of iodine tablets too, for radiation.”

At the same time, the National Emergency Supply Agency (Nesa), collects a levy from all fossil fuel and electricity purchases in Finland, enabling it to stockpile six months’ supplies of grains such as wheat and oats, and different types of fuel such as petrol and diesel.

If it all seems a little over the top, Kimmo Kohuakka, director general of Finland’s Department for Rescue Services, explains: “We still remember what happened here. There is a clear understanding in Finland about how devastating a war can be.

“During the Winter War my three uncles were moved away to Sweden, where they grew up and still live, so even I still feel the consequences. It’s always been the Finnish way to prepare for the worst.”

Previous : Adorable dog with scar on nose keeps being overlooked in kennels
Next : Bravery of young people who stood up to energy giants and saved Amazonian river – World News