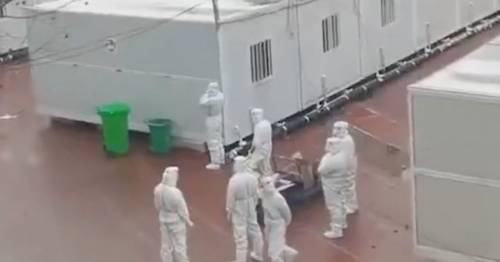 This is reportedly an inside look into China's massive network of quarantine camps where thousands of people are spending isolation in tiny boxes.

Distressing images show sprawling complexes of simple metal cabins that have been built to contain those suspected to have Covid-19.

The Communist Party has previously shown images of these facilities and last year it was reported China's National Health Commission (NHC) ordered widespread construction of the camps.

However, now, unverified videos that are being widely shared online are claiming to give a reported glimpse into what really goes on.

It is part of China's "Zero Covid" strategy when many countries – including the UK – are learning to live with the virus.

Three cities in China have been placed into full and ruthless lockdown, despite the country only recording 157 new cases nationwide.

It comes as China is gearing up to host the Winter Olympics which are due to start on February 4.

Footage on Chinese social media shows people in tiny boxes only furnished with a wooden bed and a toilet as isolation periods can last up to two weeks.

In some unverified videos, people in hazmat suits are giving food to those held there.

In others, lines of buses allegedly ready to head to the camps are seen.

Some reports suggest men, women, children and the elderly have all been among thousands detained in the camps.

One reportedly told BBC : "There is nothing here, just basic necessities… Nobody has come to check up on us, what kind of quarantine is this?.

"They did a big transfer of us, more than a thousand people, in the night and many of us are elderly people and children.

"They didn't make any proper arrangements and so they just carelessly placed us [here]."

Students and teachers queue up to receive Covid tests in Tianjin, China
(

China is widely known to manage its international image of social media, and it is unclear how much of this footage that is being shared online is genuine.

Last week, a city of almost 1.2million people has been thrown into lockdown after just three cases of coronavirus were detected.

All three cases were found in people without any symptoms and caused the entire city of Yuzhou to be told to stay at home.

These facilities are reportedly housing children and the elderly
(

The 1.2million join more than 13million people in the country currently facing tight lockdown orders ahead of the Winter Olympics which are due to kick off on February 4.

China has said it wants to be Covid-free before the games begin and local officials face the sack if cases are found in their jurisdiction.

All shops, entertainment and leisure venues have been closed and only businesses that “guarantee the supply of daily life materials” can be open.

Previous : ‘Ghost ship’ filled with guns found abandoned off the shore in the middle of the night – World News
Next : Woman who shed 4st in six months says weight-loss saved life her after finding lump