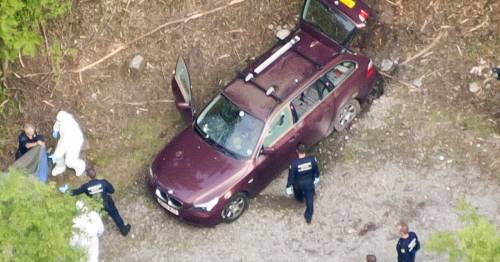 Ten years after the shocking of murder of a British family in the French Alps, detectives are continuing to interrogate a man about the unsolved 2012 killings.

In another twist in the long-running unsolved case which has intrigued people around the world, the arrest was apparently prompted by a reconstruction of the terrible events.

Now a 57-year-old married man from Lyon, who was reportedly in the area of the crime scene on the day Saad al-Hilli, his wife Iqbal, and mother-in-law Suhaila were shot dead at point-blank range, is being detained by investigators.

He was arrested at his home early on Wednesday morning in an operation that has seemingly been months in planning.

French media reported that the police previously interviewed the man as a witness in 2015.

According to information released then, he was travelling on his motorbike down the narrow road leading up to the remote clearing where the al-Hillis and a French cyclist, Sylvain Mollier, were assassinated.

On the day in question, it was revealed then, he had gone paragliding, a popular pastime in the mountains above Chevaline, the nearest village to the appalling attack.

Yet despite the worldwide publicity surrounding the extraordinary case, and near-constant news coverage in France, the man told detectives he had been unaware of what happened at the remote car park at the end of the Combe d’Ire track.

As police hold the unnamed suspect for a second day of questioning, those affected by one of the most bizarre mass murders of recent decades are hoping this might finally be the breakthrough they need.

Saad and Iqbal al-Hilli left Claygate, Surrey, in early September 2012 with their daughters Zainab and Zeena, and her mother Suhaila.

They drove by car, towing Saad’s beloved caravan, to a campsite on Lake Annecy for a family holiday. France had always been their favourite destination.

On the day of their killing, Saad had asked the campsite owner for recommendations.

They drove up a track beyond the village of Chevaline in the maroon estate car, and got out at a layby called Le Martinet to inspect a sign showing hiking trails.

At this point, exactly what happened remains clouded in mystery.

Saad, Iqbal and Suhaila were shot dead in the car, which still had its engine running, with its wheels turning in an earth bank, suggesting Saad had reversed at speed to get away.

Zainab, seven, who was outside the vehicle, was shot, pistol-whipped and left for dead by the assassin. Her little sister Zeena, only four at the time, cowered unseen under her mum's skirt in the back seat, terrified but physically unharmed.

Their home in Claygate, Surrey was searched following the deaths
(

Also at the scene was a French cyclist, Sylvain Mollier, 45, who had been shot dead too. His bullet-riddled body was discovered on the ground, a few metres from the al-Hillis vehicle, which had its windows splintered by holes from shots fired by the Luger pistol the assassin had used.

The first on the scene was a British cyclist, former RAF pilot Brett Martin, who has a holiday home near the lake, who remembers being overtaken by another pedaller, presumably Mollier, on his way up the winding hill.

At first thinking there had been a terrible accident, Brett approached the vehicle, and only then realised what had happened. He switched off the engine and – unable to get a signal on his mobile phone – went back down the hill to get help and raise the alarm.

After the killings, Eric Maillaud, the French state prosecutor in Annecy at the time, said he was sure the answer to the crimes lay in England.

During a visit to the al-Hillis’ home in England, he announced that this would be where the outwardly inexplicable assassination would be resolved.

Mr Maillaud was particularly convinced that a long-running feud between Saad and his elder brother Zaid explained what looked like a deliberate, professional hit.

The brothers had argued over the inheritance of the house in Claygate, and reportedly over their father's will.

Zaid admitted that there had been a fierce fight inside the house, which Saad lived in permanently, and that they had not been on speaking terms at the time of the murders.

Zaid was arrested and questioned in Guildford, but later released without charge.

Now retired and living near Bournemouth, he has always vehemently protested his innocence, and believes he was a scapegoat for inept French police.

Sylvain Mollier, from the nearby small town of Ugine, was a keen cyclist who would often be out on lengthy, mountainous routes on his expensive bike.

He was well-liked locally, and had recently started a relationship after a divorce from the mother of his first two children.

At the time of the killings, Mollier had stopped working at a nuclear metals processing factory in Ugine, which employs many of the town’s citizens.

The family's car is removed from the scene
(

Investigators said he was an innocent victim, in the wrong place at the wrong time, and yet Mollier was shot with seven bullets, the most of any of the four dead victims. It is also believed that he was shot first, although some dispute this.

Following the murders, it emerged that his new partner, Claire Schutz, had recently given birth to their first child, and had inherited her parents multi-million pharmacy business.

Although there has been speculation in France that this could be a potential motive for an assassination, there has never been any concrete evidence backing this up.

Mollier’s family and the Schutz family have maintained their silence since the killings.

From the outset, the French investigation has faced criticism.

Little Zeena al-Hilli was only found the morning after the murders by specialist forensic officers sent down from Paris, still beneath her dead mother's skirt.

There were also claims that the crime scene was trampled over, and disturbed, leading to clues potentially being missed – a claim disputed by French authorities.

The police cordon was lifted just a few days after the murders for journalists and TV news crews, potentially too early.

Meanwhile, the French police squandered valuable time trying to trace the al-Hillis’ passports, with investigators querying whether the assassin had taken them as proof of completing his hired job.

The identity documents were discovered in the victims’ clothes a long time afterwards.

And Eric Maillaud, the figurehead at the centre of the inquiry for the first four years, was criticised for initially dismissing theories that the al-Hillis might have been the collateral victims.

As well as the man currently under arrest, and Zaid al-Hilli, others have been quizzed as potential suspects.

Former foreign legionnaire Patrice Menegaldo, who knew Claire Schutz, committed suicide after he was questioned as a witness, without being placed under arrest.

Ex-police officer Eric Devouassoux was quizzed after a huge stash of guns was found at his property in the area, but he was later cleared of any involvement.

Nordahl Lelandais, potentially France's worst-ever serial killer, has also been interviewed, but has been ruled out.

An Iraqi prisoner, identified only as Mr S, was also quizzed, having claimed to have been paid to kill the al-Hillis, but this too was excluded.