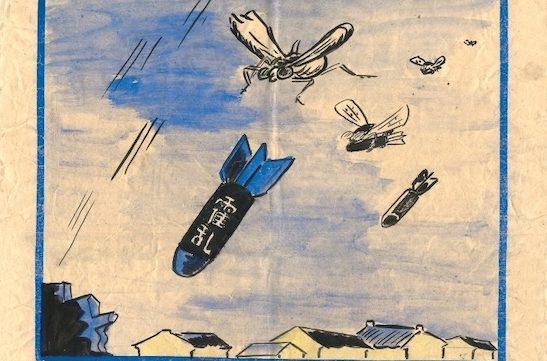 Before being coined COVID-19, the virus was known even to the politically correct media as the “Chinese virus.” Attempting to deflect blame, last month China’s Foreign Ministry spokesman Lijian Zhao sent off a tweet implying that the U.S. Army had brought the virus to Wuhan. Spokesman Zhao then called for transparency and accountability from the U.S. government. Since then, the Chinese have doubled down, spreading a similar narrative through affiliated news networks in the Arab world.

As laughable as it appears on the surface for the Chinese to accuse the United States of unleashing coronavirus, it isn’t the first time they accused Washington of conducting warfare with pathogens. In fact, it occurred during the height of the Korean War in 1952 when North Korea and China claimed the United States air-dropped bomblets loaded with millions of disease-bearing insects of every size and stripe.

The incident triggered an international scandal that remains officially unresolved to this day. And regardless of the blame game underway concerning the origins of COVID-19, its effects have been tantamount to an act of war, a war we would be careful to choose fighting given the opponent.

Entomological warfare is war waged by insects. The average history student learns of Napoleon, his exile on Elba, and Waterloo, but they rarely learn that for every battlefield loss he suffered, four more of his soldiers succumbed to disease. The majority of which were transmitted, or vectored, by insects. His aims against the Ottoman Empire were stopped by flea-borne plague, the invasion of Haiti was stymied by yellow-fever-carrying mosquitos, and his Grand Armee was reduced by 200,000 men in Russia due to louse-borne typhus.

Jeffrey A. Lockwood, a professor of Natural Sciences and Humanities at the University of Wyoming, provides a fascinating and thoroughly researched history of this irregular warfare method in his book Six-Legged Soldiers. A wide-ranging work, the author covers both ancient and modern history and all three forms of entomological warfare: disease vectors, agricultural pests, and direct attacks. The concept behind insect disease vectors is relatively straightforward. The insect feasts on some sort of contaminated food source or animal, and then spreads, or vectors, the disease to humans via their bites and saliva. The bacteria that causes bubonic plague, Yersinia pestis, spread this way during the Black Death.

Three chapters of his book concern the alleged use of insects as biological weapons in the “Forgotten War” in Korea. Despite extensive research and fact finding, independently verifiable evidence has remained elusive. What is known beyond dispute is that the United States was actively pursuing entomological warfare following World War 2. From Six-Legged Soldiers, the 406th Medical General Laboratory of the U.S. Army’s Far East Medical Section was established, “in a warehouse near the Agsugi Air Base in Yokohama (Japan) in 1946,” ostensibly to provide health services to U.S. military servicemen.

However, their mission soon expanded to include an R&D division comprised of 309 personnel. Researchers “initially concentrated on mosquito-borne diseases, but the military scientists eagerly expanded their work to include ticks, mites, lice, fleas, and flies, with particular attention to the breeding and biting behaviors of black flies and midges found in Japan and Korea.”

One might ask, how was this legal and who was funding it? Legally speaking, the United States wasn’t a signatory to a 1925 Geneva Protocol prohibiting the use of chemical and biological weapons, although we begrudgingly signed on in 1975. And as for funding, in 1950, due to the lobbying efforts of a businessman named Earl P. Stevenson and his army of scientists and engineers, Congress became convinced America was unprepared for biological warfare. The DoD then “increased funding for biological weapons development from $5.3 million to $345 million over the next three years.”

As Lockwood uncovered in his research, entomological projects soon followed the funds. One such project, No. 465-20-001 titled “Mechanism of Entry and Action of Insecticidal Compounds and Insect Repellants” contained the following synopsis snippet: “insect strains resistant to insecticides are being developed. These represent a potentially more effective vehicle for the offensive use in biological warfare of insect borne pathogens.”

This is where the trail for the truth goes cold and the only thing left in the record is international scandal. Here is a chronological listing of initial events:

A change of tactics was needed to uncover the truth or maintain the narrative, depending on whom you believe. The Chinese went back to the drawing board and returned with a persuasive title: The International Scientific Commission for Investigating the Facts Concerning Bacteriological Warfare in Korea and China. Problem was, the commission was supported by the World Peace Council, a Soviet funded organization.

The commission completed its work in August 1952 after two months of work. However, the “investigators did not conduct any field investigations of their own and relied solely on the evidence presented by the Chinese and North Koreans.” The report was composed of a mere 60 pages but dwarfed by 600 pages of appendices. The Chinese Academy of Science lent a hand and helped pair insect and pathogen combinations that were allegedly dropped by American planes.

House flies were paired with anthrax, midges carried typhoid, sun flies with paratyphoid, wolf spiders delivered fowl cholera, and fleas vectored plague, in addition to dozens of other combinations. Numerous villager testimonies were provided that correlated the presence of American planes followed shortly thereafter by insect swarms. An accounting of deaths or infections, a “sick map” in COVID-19 parlance, was deemed “not necessary for the proof of the case.

The response of the United States was predictably swift with special outrage reserved for the POW “confessions” which were so richly layered with trite Communist talking points that they bordered on the satirical. In the end, the American argument focused not on the lack of supposed evidence, but the surplus of it. Springtails and ptinid beetles were never known to bite humans or spread diseases, let alone dysentery and anthrax as the Communists alleged. If America deployed secretive and deadly biological weapons, would they do it via carpet bombing runs over several months in broad daylight using every imaginable insect-pathogen pairing?

Although no official determination of guilt or admission of culpability surfaced from the diplomatic mudslinging, the international community leaned in the direction of the United States. Over five decades later many experts can only conclude, due to lack of evidence, that the United States had the capability, but to what effect they employed it might never be known. Similarly, with COVID-19, the accusations and confusion concerning its origins continue to swirl in the news cycle.

As reported recently by TAC, it isn’t disputed that research was conducted at the Wuhan Institute of Virology on bat coronaviruses. The unknown is whether specific strands of a virus were genetically altered to make them more deadly, and most importantly, was it released intentionally? Regardless of intent, the dead tally the same with the added benefit of plausible deniability by the Chinese government. Objectively speaking, this would be strategically brilliant from the perspective of warfare. China would only stand to lose by openly attacking the U.S. Navy, but they’ve been able to take an aircraft carrier out of action and put several other ships in jeopardy, all without firing a single shot.

In a private meeting in 1961 General Douglas MacArthur cautioned then-President Kennedy against escalation in Vietnam when he said “never fight a land war in Asia.” While a land war in Asia isn’t happening anytime soon, the concept is similar. MacArthur knew from experience Asia’s greatest power was its ability to sustain casualties and wear down their opponents. As of April 18th, COVID-19 has claimed 39,115 American lives. For comparison’s sake, the United States suffered 36,914 dead in the Korean War, but inflicted over a million combined casualties upon the Chinese and North Koreans and technically won the war against Communist aggression.

As the dead continue to pile up, our economy spirals further out of control, and social cohesion teeters on anarchy in some areas, it might be time to ask: if COVID-19 is effectively an act of war, who is winning?

Jeff Groom is a former Marine officer. He is the author of American Cobra Pilot: A Marine Remembers a Dog and Pony Show (2018). Follow him on Twitter @BigsbyGroom.

Previous : The New Right, the Benedict Option, and a Second Look at Waco
Next : Folk and Fatherland: How Tight-Knit Denmark Weathers Pandemic