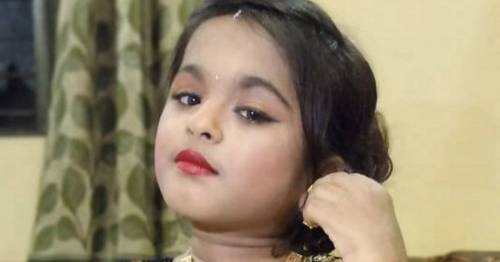 A woman diagnosed with a rare condition says that cruel online trolls often tell her she looks like a toddler.

But Aboli Jarit refuses to let her stunted growth stand in the way of achieving her dreams of becoming a model.

The 19-year-old, from Nagpur, India, stands tall at 3ft 4in and has become a viral sensation after sharing her story.

As a baby, she was diagnosed with renal rickets, a syndrome which combines deformity of the bones and chronic renal disease, also known as kidney failure.

She has to wear a nappy every days as she was born without a bladder, and is unable to walk due to her stunted growth.

Despite receiving abuse online from trolls, defiant Aboli, is determined not to let the symptoms of her condition – or anyone's opinion – hold her back.

The model and aspiring singer who has appeared on Indian Idol, is now speaking up to help others and raise awareness.

"'As your height is small, you cannot do anything, you do not walk, then how will you become an actor', some people abuse [me]," she told Jam Press.

"Not many people have this rare disease, the good thing is I'm still surviving and most people can't survive with this.

"But all the doctors said that there is no solution and it will remain same."

Aboli can find everyday life difficult, especially when it comes to leaving the house.

She said: "There can be a lot of problems, if I have to go somewhere outside, then I cannot go.

"We also don't have a car to come and go and I have to put a diaper on my waist as sometimes it can get wet.

She has already appeared on Indian Idol
(

"I wasn't born with a urine bladder and because of that urine keeps flowing through my waist all the time.

"Due to this disease I had an operation to make a hole in my waist so that urine could not accumulate."

Aboli's biggest goal in life is to become famous; she wants people to recognise her in a different way to how she is perceived due to her height.

As a child, she fell in love with singing and dancing and she dreamed of becoming an actress – but as her bones became progressively weaker, she found herself unable to stand.

As a baby, she was diagnosed with renal rickets
(

Soon, she began falling down and once fractured her leg, which later became so painful that she stopped walking altogether.

However, her determination has prevailed and she continues to dance while sitting down, proving her unbeatable talent.

Soon after the accident, she was entered into a talent competition by her brother, Akash, which boosted her confidence as she was selected as one of the finalists.

Since then, she's continued her pursuit of becoming an actress – even starring on Indian Idol.

Aboli, who is also a student, added: "When I went to Indian Idol, it was a matter of great pleasure for me, I can't tell you how much I loved it.

"I am my own inspiration because I have learned to live life from what has happened to me from childhood till today."

The teenager has now become a viral sensation with over 6,000 followers on Instagram and has also earned a finalist spot in Mrs Wheelchair India.

She added: "I felt very good and that feeling was different for me, I hope I can go to Miss Wheelchair World too.

"I want to become a singer and an actor, in Bollywood and Hollywood, I hope to be able to do it soon."